A Question of Faith (chapter) 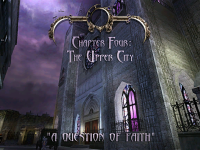 Chapter 4: The Upper City: A Question of Faith was the fourth level of Blood Omen 2 . It followed Kain in the Upper City, from him leaving the Lower City in Chapter 3, until he reached the Sarafan Keep in Chapter 5 .

Chapter 4 followed on from the video at the end of Chapter 3:The Lower City ; Kain had found Sanctuary hidden under Blue Lady Curios, but had also discovered that Umah's mission to The Industrial Quarter had been compromised and she had been captured by the Sarafan and taken to the Sarafan Keep. In order to find the secret entrance to the Sarafan Keep, Vorador sent Kain to the Upper City to find the Bishop of Meridian, who knew it's location.

Shortly into the level, Kain met traitor Vampire, Marcus, who tried to subjugate Kain's mind using his Dark Gift Charm. Marcus failed to control Kain, but was able to read his mind, learning that the Bishop had important information for Kain. Marcus immedietly set off to reach and Kill the Bishop before Kain could get his information. Kain spent the majority of the rest of the level in pursuit of Marcus (using rooftops and sewers to avoid the Sarafan and Ward Gates on the main road).

Kain arrived at the Bishop's Manor shortly behind Marcus and found from Cabal Contact butler, that the Bishop had already fled via a secret passage to Meridian Cathedral. Arriving at the Cathedral, Kain found the Bishop, apparently in a catatonic state. Rather than follow Marcus' instructions to spare the Bishop's life, Kain instead charged Marcus, aiming to kill him first. Kain pursued Marcus around the Upper City and back to the Cathedral roof, where both Vampires fell through a stained glass ceiling, ending up battling in the Cathedral again. Kain was able to use the Cathedral Bells to deafen Marcus and defeat him (see Marcus (boss)), absorbing his veins and gaining the Dark Gift Charm and allowing him to talk to the Bishop, who was able to direct Kain to the secret entrance to the Sarafan Keep and Chapter 5 [BO2].