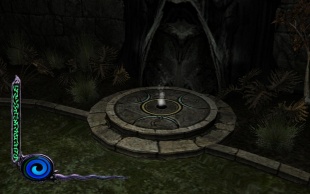 "This seemed to be attuned to the elemental principal of air."
―Raziel[src]

Air plinths were elemental platforms encountered in Soul Reaver 2 and Legacy of Kain: Defiance that allowed the user to be blasted upwards by an Air updraft. Usually their operation depended upon the Air Reaver.

Air Plinths were featured in Soul Reaver 2 and Defiance. They could first encountered as early as Decision at the Pillars of Soul Reaver 2 where Raziel could find them in several areas beginning in the Subterranean Ruins,[SR2-C5] but he could not identify or use them until he progressed to the Air forge in The Air Forge (chapter) in the Post-Blood Omen era. After gaining the Air Reaver at the forge, Raziel could use it to activate an air plinth for the first time and it expelled an Air updraft which he could use to glide upwards to a high opening and escape the main forge chamber.[SR2-C6] Thereafter Air plinths were seen throughout the rest of the game; each activated by the Air Reaver and expelling an air updraft which Raziel could glide on to reach higher platforms or areas. Notably the plinths were necessary to reach the Time-streaming chamber in the Swamp, to reach the mountains and Uschtenheim in Nosgoth's early history and to complete the puzzles in the Fire forge and Janos Audron's Retreat.[SR2][SR2-C7][SR2-C8][SR2-C9]

The Air plinths returned in Legacy of Kain: Defiance with much the same functionality and a slightly different design. Here they could be observed from the Reveal the Guardian Citadel when Kain visited the Pillars of Nosgoth - but as before they were initially unreachable inactive and unable to be utilised.[DEF-C5] Soon after, Raziel reached the Pillars himself in Find the Location of Vorador's Mansion and was able to locate a Sealed door which he could enter to find a Warp gate leading to the Air forge within the Vampire Citadel. Once Raziel had completed the puzzle and gained the Air Reaver he could activate the air plinths, sending a blast of air upwards and physically pushing him to higher areas and allowing him to escape the forge.[DEF-C6] Thereafter Air plinths were seen throughout the rest of the game, each activated by the Air Reaver and each pushing Raziel upwards on an air updraft to a higher platform. Notably the plinths were used to reach Vorador's Mansion and at several stages within; and in several areas within the Vampire Citadel, including the Earth forge and Spirit forge.[DEF][DEF-C8][DEF-C9][DEF-C10][DEF-C12][DEF-C13]

Despite their similarities, the appearance of the Air plinths changes and they function slightly differently between Soul Reaver 2 and Defiance.

When they first appear in Soul Reaver 2, the design of the Air plinths consists of four brown-colored circles arranged in a 'Y'-shape, each with a circular hole at the center. The middle circle had a slightly raised brown border and the outer edge was lined with an orange trim which spiraled inwards to the center hole, giving the appearance of a whirlwind-like shape. The three outer circles had their own similar borders which were instead lined with a pale blue color, with each border containing a number of subtle runes. At the heart of the outer circles was positioned an Air symbol, with the centre space occupied by each circles central hole.[SR2][SR2-C6][SR2-C7]

This basic design was continued through Soul Reaver 2, however when Raziel reached the icy areas of Janos Audron's Retreat in Nosgoth's early history, the coloring of the plinths was altered become a uniform pale blue (with the orange trim dulled to a light brown), as if the plinth had become frozen with the falling temperatures. Several plinths in this area were initially hidden, but could be nevertheless be identified - in this state, they appeared as a subtle brown outline of the plinth, with a small Air symbol visible in the middle of the center circle. When activated, these hidden plinths were 'spawned' by a fountain of blood, briefly appeared as a completely red 'bloody' version, with air symbols at the center of all four circles, before fading to their blue design.[SR2][SR2-C8] The plinths that appeared in Defiance bore a much simpler design, consisting of a basic circular stepped stone platform. Several light grey colored curved stone bricks were visible curving around the central circular platform, which itself was lined with a border of the same light grey color. The center of the platform, backed by a darker shade of grey, consisted of a large Air symbol, with a small hole in the center of the symbol for activation.[DEF]

In regards to their function, the plinths in Soul Reaver 2 were initially encountered in an inactive state and were activated by Raziel driving the Air Reaver down through the opening on the central circle, which caused the plinth to begin issuing air from the openings on the outer rings before expelling a larger, more powerful updraft from the central opening. This updraft would remain in place, allowing Raziel to (manually) jump and use his wings to glide upwards on the updraft until at sufficient height to reach the obstacle or platform; often his would entail circling within the updraft or crossing the stream several time until the desired level was reached. In Defiance this process was slightly different. Initially the plinths would be inactive, but once Raziel gained the Air Reaver, they would begin to issue a subtle air-stream from the central opening. Driving the Air Reaver into this opening would cause the plinth to issue a single large 'burst' of air, immediately propelling Raziel to the sufficient height without requiring manual adjustment or the use of gliding to get there; and from here he could continue onward, gliding if necessary to reach platforms. It is likely this change was for gameplay reasons - making the plinths easier to use for players who found the Soul Reaver 2 version overly sensitive and difficult to remain in the air stream.[SR2][DEF]