"Damn you, Alchemist! I had not come this far only to have my quarry escape!"
―Kain — Listen (file info)[src]

Anarcrothe (also spelled Anacrothe or Anacroth) the Alchemist was a character appearing only in Blood Omen: Legacy of Kain, and a member of the Circle of Nine. He was the human Guardian of the Pillar of States in the Blood Omen era, tainted by the corruption of the Pillars, and hunted down by Kain, the "scourge of the Circle", during his quest to restore the Pillars of Nosgoth.

Kain located Anarcrothe, along with fellow Guardians Bane, DeJoule, and Malek, at Dark Eden, but Anarcrothe managed to escape. Anarcrothe was later slain not by Kain, but by Mortanius, in a sorcerous duel after a dispute at the Pillars, enabling Kain to temporarily restore the Pillar of States. 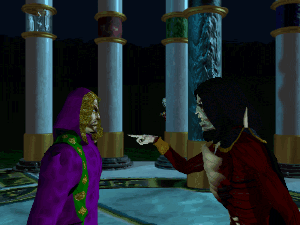 Kain watches as Anarcrothe bickers with Mortanius at the Pillars of Nosgoth.

Upon the death of his predecessor, Anarcrothe was born to serve the Pillars of Nosgoth as the States Guardian, some time during or between Nosgoth's early history and the Blood Omen era.[BO1-C9] After the Mind Guardian, Nupraptor, descended into madness following the murder of his beloved, Ariel, the Pillars' corruption drove Anarcrothe insane; he asserted the absolute authority of the Circle, and, eventually, entered into an alliance with fellow Guardians Bane and DeJoule.[1][BO1-C11][BO1-C7] The triad banished themselves to the far north, "[congregating] at the roof of the world".[BO1-C7]

Over time, the three abused their magics to malform a region in northern Nosgoth into the Dark Eden – "a garden of horrors, seeded with sick perversion of nature's design".[BO1-C7] After Kain emerged from Vorador's Mansion in the Termogent Forest, he was contacted by Mortanius – who hinted that his vengeance lay north – and encountered hideous mutations of nature along the roads outside of Uschtenheim. Journeying further, through the Ruined Land, Kain spotted the Dark Eden and the dome of energy rising from its apex. Suspecting the involvement of the Guardians, he passed unscathed through the malignant vortex, and breached the Dark Eden Castle at the heart of the warped land.[BO1-C7]

"You betrayed us Mortanius! You had Kain killed and turned him into a monster! You set him upon us!"
―Anarcrothe[src] 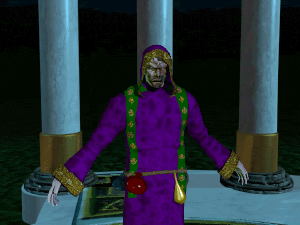 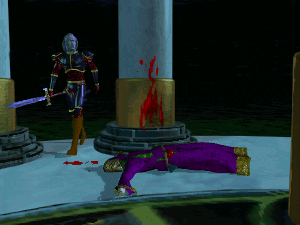 Upon entering, Kain found the three Guardians responsible for the miasma seizing the land. DeJoule prepared to face Kain in combat, but Anarcrothe denounced her intent as "ridiculous". He summoned Malek to his aid before teleporting away, leaving his three comrades to their fates at the hands of Kain and Vorador. Kain cursed Anarcrothe's name, but was powerless to prevent his enemy from fleeing.[BO1-C7] Anarcrothe did not re-emerge until after the death of Moebius, when he confronted Mortanius at the Pillars, unaware that Mortanius had already summoned Kain to witness "the grand finale".[BO1-C11]

Indignant that Mortanius had killed Kain to use him as the instrument of the Circle's destruction, Anarcrothe accused Mortanius of betrayal, obstinately denying that the Circle had failed in its sworn duties. He maintained that their powers would "save or damn Nosgoth at [their] whim", and issued the Necromancer an ultimatum – "stand with us, Mortanius, or die".[BO1-C11]

Mortanius welcomed the promise of death, but he was unaffected when Anarcrothe blasted him with jets of a viscous green substance, absorbing the attack. Mortanius countered with a blast of lightning which knocked Anarcrothe to the ground, then telekinetically sundered his prone, bleeding body against the Pillar of Nature. To conclude the duel, he invoked shadow spots to snap Anarcrothe's spine, dispatching the Alchemist with ease. Kain subsequently returned Anarcrothe's Scales to the Pillars, briefly restoring the Pillar of States.[BO1-C11]

"Failed our duties? Idiot! The Circle exists for us, we don't exist for it! Our powers will save or damn Nosgoth at our whim! Stand with us, Mortanius, or die!"
―Anarcrothe[src]

In Blood Omen: Legacy of Kain, Anarcrothe was voiced by Richard Doyle, who also voiced Moebius and Nupraptor.[BO1] He is the only member of the corrupted Circle of Nine who is never fought during the course of the game, a fact which prompted fan questions as to the nature of his abilities, which Silicon Knights allayed in The Complete Guide To Legacy of Kain.[2]

One line of deleted dialogue exists in Blood Omen: Legacy of Kain which was intended for Anarcrothe, while the cinematic in which he confronts Mortanius at the Pillars was (at least partially) planned to be an in-game sequence.[3] In the deleted dialogue, Anarcrothe accuses Mortanius of being "the Circle's traitor". Mortanius admits to consciously murdering Ariel in an attempt to "resurrect the world" (in contrast to Legacy of Kain canon, wherein the murder of Ariel was performed by the Hylden Lord possessing Mortanius' body).[4]

Beyond referring to Mortanius' questionable loyalty to the Circle of Nine, Anarcrothe's final line to Mortanius, "stand with us [...] or die", has other meanings according to Amy Hennig.[5] The deeper implications behind his use of the pronoun "us" have not been revealed, but it has been speculated that Anarcrothe may have been referring to the Hylden.[6]

As a pre-eminent Alchemist, Anarcrothe wore "robes of dark, imperial purple, embroidered with the arcane symbology of his craft". Some time long prior to the events of Blood Omen: Legacy of Kain, Anarcrothe engaged in an ambitious alchemical experiment which accidentally scarred him irrevocably, burning away the left side of his face. The acidic energies "meld[ed] skin and bone in an unsightly writhing tangle", and Anarcrothe took to hiding his mutilation beneath the hood of his robes, leaving only the unscarred, right side of his face visible.[1][BO1]

Anarcrothe is described as "a tinkerer", who "concocts, explores [and] experiments".[1] Following the corruption of the Pillars, he is characterized by his ambitiousness, arrogance, and elitism, appearing to consider himself and the rest of the Circle of Nine the judicators of all the inhabitants of Nosgoth. While willing to corrode the land and its denizens to shape his own ends, Anarcrothe does appear loyal to the Circle as an entity, and fervently tries to prevent its dissolution at the cost of his own life.[BO1-C11] Nevertheless, Kain notes with curiosity that he is strange among sorcerers in condescending to work alongside DeJoule and Bane at all.[BO1-C7]

Though an imperious spellcaster in his own right, Anarcrothe displays a cowardly and survivalist nature when confronted by Kain, electing to summon Malek to fight his attacker for him.[BO1-C7] Anarcrothe is, however, shown willing to battle on his own terms when initiating his challenge against Mortanius, though he chooses his opponent poorly – and fatally – in underestimating the Necromancer's ability.[BO1-C11] In deleted dialogue from Blood Omen: Legacy of Kain, Mortanius somewhat wistfully addresses Anarcrothe as his "old friend", possibly implying a past genuine amicability between the two.[3] 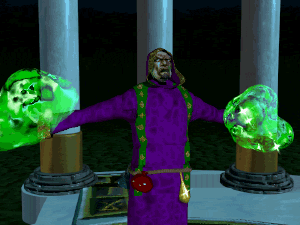 In addition to the agelessness afforded to him by his role, Anarcrothe's position also granted the power to alter the form of matter, and over the years he "fool[ed] around with chemicals, alien substances and strange machinery", dabbling and experimenting with "forces he only partially [understood]".[1] He is presumably the co-creator of the mutants who dwelled within and near the Dark Eden.[BO1-C7]

Anarcrothe's room in the Dark Eden Castle offers a greater insight into the Alchemist's means; "inside was all manner of items arcane: pickled bodies, dissected corpses, both man and beast, and metal constructs that heaved arcs of energy into the air".[BO1-C7] Anarcrothe's offensive powers as a sorcerer are left vague, and are only witnessed on one occasion. While battling Mortanius, he conjures jets of an unknown, bright green substance and blasts his foe; due to its ineffectiveness, the nature of the attack is unclear, though it seems to have been an attempt to morph or malform Mortanius' body.[BO1-C11]

Anarcrothe was named Nauzhinger at some point during the development of Blood Omen: Legacy of Kain, but was renamed alongside numerous other characters.[7] It is possible that Anarcrothe's final moniker is derived from the terms "anarch", "anarchy", or "anarchist", words which suggest the incitement of revolt and rejection of authority.

The correct spelling of Anarcrothe's name is a matter of some dispute; official sources, both within Silicon Knights and elsewhere, alternate between Anarcrothe, Anacrothe, or Anacroth, with none having been confirmed as accurate to date; even the original Blood Omen scripts give inconsistent variations.[8][9] The most recent nomenclature publicly utilized by a Crystal Dynamics employee was "Anarcrothe", by Amy Hennig, which was since been deemed the primary spelling by several fansites.[5][6][10]