The Ariel Reaver was an enhancement for the Wraith Blade that was planned for inclusion in Legacy of Kain: Soul Reaver, but was ultimately cut due to time constraints.

The Ariel Reaver was an enhancement for the Wraith blade that Raziel was intended to gain in the final stages of Legacy of Kain: Soul Reaver, presumably as he pursued Kain to his mountain retreat. Informed by Ariel that only with her soul would he be able to harm Kain, Raziel absorbed Ariel's soul into the wraith blade, creating the powerful Ariel Reaver and allowing Raziel to kill Kain and gain the Amplified Reaver. Like the Amplified Reaver, the Ariel Reaver was a permanent enhancement which replaced his other wraith blade enhancements, though it is unclear what special abilities it had, if any.[1]

Despite being removed, the blade can be activated in game through the use of the debug menu, revealing it was a golden blade with a white core. No special abilites were present in-game.[2][SR1][1][3] 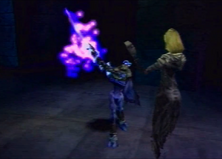 Raziel gaining the Ariel Reaver in the Chronoplast vision