"Avernus lay in ruins before me. Whatever hand slaughtered its people ravaged the city as well."
―Kain — Listen (file info)[src] 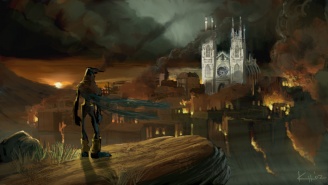 Avernus was a major city in Nosgoth that was visited as a playable location in both Blood Omen: Legacy of Kain and Legacy of Kain: Defiance. The walled city was dominated by its large Cathedral .

The city was once ruled by the Matriarch of Avernus, Azimuth, who upon becoming tainted by the corruption of the pillars, began summoning Demons from other dimensions (presumably the Demon Realm ) to attack the city, by the time the fledgling Kain ventured there, the city was in flames and much of the populace had been slaughtered by Demons, who avoided attacking the Cathedral itself, as this was the lair of Azimuth. Once within the Cathedral, Kain was able to find and claim the Soul Reaver blade (and the Wraith armor ) to defeat Azimuth and her demons. Within the walls of the Cathedral he also uncovered the first clues as to the true nature of the corruption of the pillars in the Avernus Catacombs, in the shape of Hash'ak'gik's altar .

In Defiance, Raziel was directed to the city, in search of the Heart of Darkness . Kain; advised of Raziel's progress and shown an image of Raziel overlooking the city in flames; was sent to a time period shortly after his visit in Blood Omen to confront Raziel. They both arrived at the Cathedral, though by the time Kain had arrived, Raziel had uncovered the catacombs, and found out some of its secrets regarding the Hash'akgik cult and Hylden history. Kain and Raziel were to battle in the Cathedral, believing they were enacting the champions' final battle. With Raziel claiming the Heart fo Darkness and victory, he left the apparently dead Kain, who had been blasted through a portal to the Demon Dimension and continued his quest to revive Janos Audron . Shortly afterward, Kain managed to escape the Demon Realm and he too left Avernus for the Vampire Citadel . The City was presumably engulfed by the flames and completely destroyed shortly after. 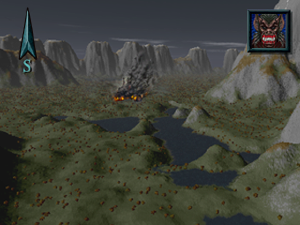