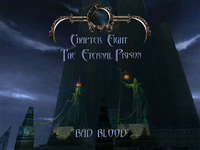 Chapter 8: The Eternal Prison: Bad Blood is the eighth chapter of Blood Omen 2, it followed Kain's journey to the Eternal Prison to find the Builder and a way to destroy the Device. This chapter is succeeded byChapter 9: the Device .

Having learnt of the Device from Sebastian inChapter 6: The Canyons, Kain travelled to the Seer's Cottage and met the Seer, who gave him theDark Gift Telekinesis and teleported him to The Device. Meeting The Beast, Kain realised he would be unable to destroy the Device on his own and on the Beast's recommendation, he followed a trail to the 'timeless' Eternal Prison to try to locate the Builder of the Device.

Once Kain arrived at the Eternal Prison he was advised by the Prison guardians that no guests, visitors or intruders were allowed, lest they interfere with the routine at the Prison. Kain resisted several attempts by the Prison Guardians to remove him, finally openly fighting them as he penetrated further into the Prison. Kain uncovered hideous torture taking place at the Eternal Prison and a mysterious mutilated vampire, following him through it. Eventually Kain was able to find the Builder's chamber and speak with him[BO2].

The Builder, a withered Hylden, explained about the Device; that it was a weapon leftover from the Elder Wars. At its heart was a creature, the Mass, whose thoughts were powerful enough to destroy all creatures not of the Hylden Race . The Builder explained how the Device had remained incomplete because of the lack of an accompanying network to project the Mass' mental energy onto. Kain realised that theSarafan had completed this network in the guise of providing Glyph magic energy to Meridian's people and now they were ready to use the Device. The Builder revealed that the Device had a simple weakness - the Mass was vulnerable to the "blood of the elder races".[1] Granting the Builder freedom from his eternal torment, Kain killed the Builder and drank his blood .

Blazing his way through the Prison, Kain had apparently ruined much of the Prison guardian experiments. Attempting to exit the Eternal Prison, Kain was trapped in a maze, still being followed by the mutilated vampire. Kain was eventually able to confront the vampire and toppling a large statue of Moebius onto him, the vampire regained his memory as Magnus, the champion of Kain's vampire army . Kain again granted the release of the grave to his old friend and returned to the Device to destroy it[BO2].

In this level, Kain can find 3 Red and 8 Blue Lore coffers (for a total of 54 'Lore Orbs') and two Weapon power chests . The enemies of this level are the debuting Prison guardians, Poltergeists and Demon spiders, though none of them carries weaponry that can be picked up, this level contains many examples of Double Bladed Swords, Short axes and the Broadsword . The NPC's seen in the level are largely Eyeless wretches . Kain also gains the Immolate Dark Gift, though he is unable to use it in this level[BO2].