"The bells of the Silenced Cathedral will ring out across the land once again."
―Construct of the elder gods[src]

Bells are simple cup-shaped musical instruments designed to resonate and 'ring' at a specific note frequency. Within the Legacy of Kain series, bells were first featured as a puzzle element in Legacy of Kain: Soul Reaver, appearing in the Silenced Cathedral and Drowned Abbey - with a larger role involving re-imbuing the Sound Reaver planned but ultimately cut. Bells would return as a minor puzzle element in Blood Omen 2, where they were used on two occasions through the Upper City. 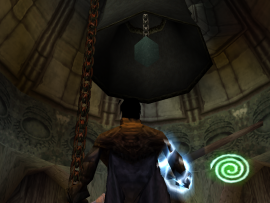 Bells first made an appearance in Legacy of Kain: Soul Reaver where there were four bells located in the Silenced Cathedral and one in the Drowned Abbey.[SR1] First discovered in the The Silenced Cathedral (chapter), two of them were used to shatter the stained glass in middle part of the Cathedral and another bell was located within the upper part, which alerted the nearby Pupating Zephonim to Raziel's presence instead. A third larger bell located in the Sound Glyph area could only be activated by the Gong Stick.[SR1][SR1-C5][1] Another bell was later discovered in The Drowned Abbey (chapter), located within the bell tower in Drowned Abbey, activated by pulling the chain, the ringing of this bell provided the entrance to Rahab's lair.[SR1][SR1-C7][1] The bells of the Silenced Cathedral were also briefly mentioned in the Construct of the elder gods prophecy in the Legacy of Kain: Soul Reaver comic.[SR1-Comic] 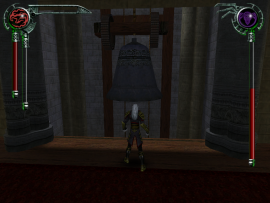 One of the Cathedral bells in Blood Omen 2

Bells returned as a puzzle element in a minor capacity in Blood Omen 2, where two bell-related puzzles were featured in A Question of Faith (chapter) in the Upper City. The first was discovered in the clock-tower near the Bishop's Manor and was rung by Kain as part of a minor puzzle to cause the workers to change their shifts and thus open the gates, allowing Kain access to the Manor. Shortly after Kain would pursue Marcus to Meridian Cathedral and managed to confront him inside the building, where he would use two Switches in the lower cathedral to ring the Cathedral bells and momentarily stun Marcus. Eventually Marcus ordered Sarafan priests to cut the bell ropes, lowering the bells and preventing the switches from activating them, though Kain could still grab-throw the priests directly into them for the same effect.[BO2][BO2-C4][2] 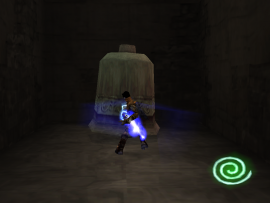 The Bells in Legacy of Kain: Soul Reaver were likely to have originally been envisaged with a much larger role in the title. Initial plans featured several enhancements for the Wraith Blade; each based on the methods of killing vampires used in the game, each accompanied by an associated Glyph spells, each gained from a specific (often removed) forge and each intended to be re-imbued by striking the appropriate element. With several elements of the Cathedral heavily associated with Sound - such as the Sound Glyph altar location, the Bells, various sound related piping, the probable placement of the cut Sound Reaver forge inside and the final removed sequence featuring Raziel's ascent to the Pinnacle of the Silenced Cathedral to open the main sounding pipes and destroy the vampire population of Nosgoth - it is suspected that the Bells present in the Silenced Cathedral were supposed to be the only means of re-imbuing the Soul Reaver with the Sound element, which would have been achieved by striking the bells with the Wraith Blade.[3][4][5][6][7] 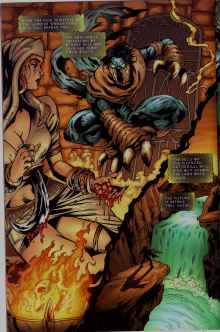 The "Bells of the Silenced Cathedral" are specifically mentioned in the Legacy of Kain: Soul Reaver comic in a panel told by the Construct of the elder gods, apparently relating a prophecy of Raziel's resurrection as a wraith and revenge against Kain and his brothers.[SR1-Comic] This version includes mentions of several events that ended up cut from the final game due to time constraints.[8][5][6][9][10][11][12][13] Curiously, the bells are mentioned in the panel apparently referring to the final epilogue at the Pinnacle of the Silenced Cathedral, instead of the "sounding pipes" mentioned consistently in other sources and it is unclear if this implies that the weapon at the pinnacle was originally intended to have been a set of bells before it was re-imagined as a pipe instrument.[SR1-Comic][5][6]