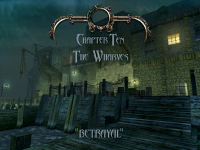 Chapter 10: The Wharves: Betrayal is the tenth and penultimate chapter of Blood Omen 2, it followed Kain's (and Umah's) trip to infiltrate the Wharves and board a ship heading to the Hylden City . It is succeeded by Chapter 11:The Hylden City.

At the end of Chapter 9:the Device, Kain rescued Janos Audron from the Device and provided the Cabal with new information; revealing thatthe Hylden had control over the Sarafan and that with their primary weapon destroyed, they (the Hylden) would use their initial breach between the Realms (the Hylden Gate) to launch a full invasion of Nosgoth. Realising they must reach the Hylden City and close the Hylden Gate (using the powers of the Nexus Stone ), Janos informed Kain that the Hylden City was protected by a "shield of magic"[1] which prevented teleportation. Seeking an alternate way to reach the Hylden City and deactivate the shield, Kain (reluctantly accepting Umah's companionship) travelled to the Wharves seeking a ship travelling to the Hylden City.

In Chapter 10:the Wharves, Kain and Umah arrived at the bridge to the Wharves, where Umah explained to Kain that they were seeking a 'War Galley' in the Southern Docks [2] and lectured Kain on the perils of the heavily guarded area. Upon Kain's arrogant reply, Umah began to inquire about the fate of the Cabal once the Sarafan, Sarafan Lord and Hylden had been defeated. Kain shared his vision of a Nosgoth completely under his control, hesitantly saying the Cabal Vampires would be allowed to do as they wished. Umah clearly believed Kain to be lying, saying that as they would be the only ones able to stop him, Kain would hunt down the Vampires. Umah stole the Nexus Stone from Kain and Teleport further into the Wharves, intending to use the Nexus Stone to defeat the Sarafan Lord and close the Hylden Gate herself. 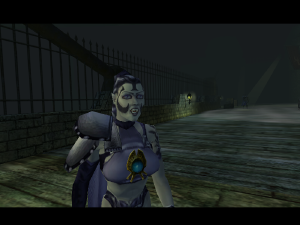 Umah after stealing the Nexus Stone from Kain

Angrily Kain pursued Umah intothe Wharves, finding that the local fog had severely restricted movement throughout the Wharves. Kain was able to overhear two Merchants discussing access to their ships and find out the password ("North Star"[3]) to allow Kain to enter the shipyards. Finding his access blocked by several inactive ships, Kain activated several lighthouses, enabling the ships to move and unblock Kain's path. Outside the Southern Docks he met a Cabal contact who informed him that to sneak into the Docks, he would have to reposition another Lighthouse, allowing a Sarafan supply ship to dock and tricking the Sarafan troops into lowering the drawbridge to the Southern Docks. 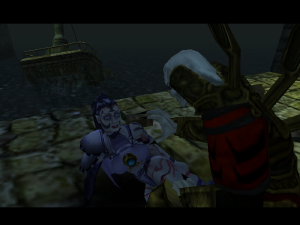 Umah shortly before her death at the hands of Kain

Shortly inside the Southern Docks, Kain finally caught up with Umah, who had clearly been overpowered by a group of Sarafan Knights and Glyph knights. Killing the last Knight, Kain softly taunted Umah reminding her of his vision of empire . Umah now agreed with him about it, begging for him to use his blood to save her. Instead Kain killed her and took back the Nexus Stone, showing the price traitors would pay in his empire and regretting that she "could have been [his] Queen".[4] 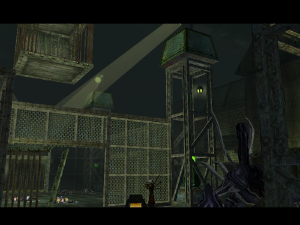 The Greater Demon escaping its cage

soon found the War Galley in the Southern Docks; loading up Hylden supplies, which even included several captured Humans and a caged Greater Demon. Vorador (still unaware of Umah's death) Whispered to Kain to get him to release the Demon and use its cage to smuggle himself onto the galley. Kain Charmed a nearby Industrial Worker making him lower the cage, allowing the Greater Demon to dispose of several Sarafan Knights and break through a larger cage and wall to make its escape. Kain then Charmed the worker into load him and the cage onto the ship, which was bound for the Hylden City [BO2].