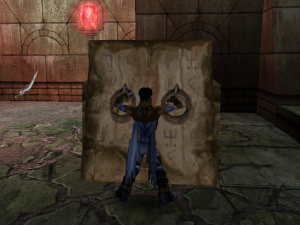 Raziel grabs hold of a block in Soul Reaver 2

"Your physical prowess surpasses what you knew in life. Even massive obstacles can be moved effortlessly."
―The Elder God — Listen (file info)[src]

Blocks, also known as Moveable Objects, were a recurring element in the Legacy of Kain series, generally appearing as cube-shaped objects that can be moved by the protagonist. Often used as a component of puzzles, they can be either grabbed, dragged, pushed or on occasion even flipped into position, with varying effects. 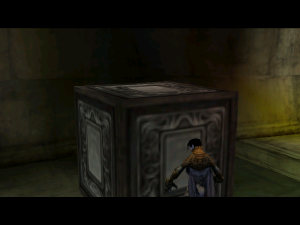 Raziel's first encounter with a block in Soul Reaver

Although basic moveable objects such as Chairs and Boulders had appeared in Blood Omen: Legacy of Kain, Legacy of Kain: Soul Reaver was the first Legacy of Kain title to include true three- dimensional 'blocks' that could be grabbed and moved along with related puzzles.[BO1][SR1] Although their exact usage varied with title, block could generally be shoved and pushed, lifted and flipped or simply grabbed and moved backward, forward or sideways - usually this was necessary to put them in a specific place to further a jumping puzzle or just slot them into an appropriate place or orientation to activate a switch or complete a mural puzzle or similar system.[SR1][SR2][BO2][DEF]

Raziel first encountered blocks on his exit from the Underworld in Prologue (SR1), shortly into the Sanctuary of the Clans area. Here the Elder God educated Raziel on their use and the basic mechanics associated with them and by moving the block to jump upward to a higher ledge (after defeating the nearby Fledgling Dumahim) Raziel was able to progress onward. Block puzzles were thereafter one of the most numerous forms of puzzle in Legacy of Kain: Soul Reaver, appearing in virtually every chapter and major area including the outer areas of the Sanctuary of the Clans in Underworld (chapter), Raziel's clan territory in Raziel's Clan Territory (chapter), the Necropolis in Necropolis (chapter), the Silenced Cathedral in The Silenced Cathedral (chapter) (notable for having several block puzzles within), the Tomb of the Sarafan in Tomb of Sarafan (chapter), 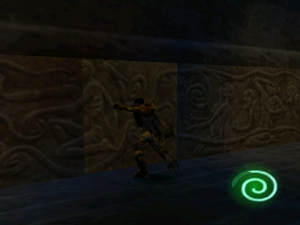 the Ruined City in Ruined City of the Dumahim (chapter) and the Oracle's Cave in Oracle's Cave (chapter). Blocks and block puzzles were also used as puzzle elements in many optional areas like the Stone Glyph altar, Lighthouse, Human Citadel and the Water Glyph altar. Blocks in Soul Reaver were uniquely able to be lifted and flipped over by Crouching alongside one of the faces enabling them to be turned over, which was useful in solving some of the more complicated puzzles which required the blocks to be correctly orientated in position.[SR1][SR1-C1][SR1-C2][SR1-C3][SR1-C5][SR1-C6][SR1-C8][SR1-C9]

Blocks returned in Soul Reaver 2 in a much reduced capacity to their predecessors. With less optional puzzles and sidequests than Legacy of Kain: Soul Reaver, and with many new and different elemental puzzle elements, blocks were confined to puzzle elements within the various elemental forges and were first encountered in the Dark forge in Through the Swamp. Blocks in Soul Reaver 2 could no longer be flipped and were often more thoroughly integrated into the environment - usually appearing as regular objects rather than the traditional cube-shaped block.[SR2][SR2-C3][SR2-C4][SR2-C6]

Blocks reappeared in Blood Omen 2 with a slightly different feel to them. This time when in use, Kain would raise a single hand to move them - apparently utilizing a form of basic telekinesis to do so. Here they were again unable to be flipped and were no longer able to be sidestepped. Kain first encountered a moveable block in Chapter 1: The Slums towards the end of the level, when basic prompts were given about moving blocks. After this incident, the blocks of Blood Omen 2 were seen fairly regularly as a basic puzzle element and generally retained a traditional cube shape though they were often justified as crates of some description. Glyph batteries - which were treated almost identically to regular blocks were also seen in the title.[BO2][BO2-C1] [BO2-C2][BO2-C3][BO2-C4][BO2-C7][BO2-C9][BO2-C10][BO2-C11]

Blocks were again seen in Legacy of Kain: Defiance though due to the combat focus of the title, they were far less common than previously and were only seen on rare occasions. Blocks were first encountered by Kain in the relic room of the Sarafan Stronghold in Pursue Moebius and were thereafter seen occasionally as elements of basic puzzles. Much like in Soul Reaver 2 blocks were able to be grabbed, dragged and sidestepped into place and were once again integrated into the environment as a common objects.[DEF][DEF-C3][DEF-C4][DEF-C6][DEF-C8][DEF-C12]

Legacy of Kain: Soul Reaver in particular featured numerous blocks and block-related puzzles, and with so many different variations the mechanics of block usage required extensive testing. Several Push and Test rooms exist in early versions of the game which were notably isolated from the main game world and were used by developers to test blocks, gameplay and other game elements, mechanics and features. At least 40 different push and test rooms were created for these purposes (labelled as "Test1" to "Test30" and "Push1" to "Push10"), with many containing blocks - these rooms appear in Debug menus in early versions of the game and even into the retail version at least one room - "Push1" - survives in the files of Soul Reaver. At least one block related mechanic was discarded from these testing processes with early versions and testing rooms containing several blocks on slopes that are not present in retail versions.[SR1][1]

Among the fan community, Legacy of Kain: Soul Reaver is somewhat infamously associated with its numerous block-related puzzles and the title has often been criticized for its over-reliance on them. These complaints have been acknowledged several times in developer interviews and explained as the product of technical limitations and independent teams working on several areas simultaneously.[2] According to director Amy Hennig:

"Yeah, there were just too many of them. There are still blocks, and there's still dragging stuff, I think that's sort of a key behavior that you need in the game, but we just used them as a fallback way too many times. There are a few reasons for that: Part of it was different people working on different levels and suddenly you look at how it comes together and oh, wow, we all used blocks. But the other part was just trying to come up with more in-depth puzzles and not having enough tools in the toolbox. So that's something we addressed right away, well how can we get more tools in the toolbox? The engine already had a lot of capabilities -- the whole goal all along with the engine was to make sure that the designers and artists really had the autonomous power to do cool stuff on their own and not have to put a request in to the programmers. You can key up cinematics, which you can key up puzzle events, all based on this contextual scripting system. We're doing a lot more of that."
―—Amy Hennig[2]

Subsequent titles noticeably continued to use blocks as an element but did not retain the complex puzzles previously associated with them, instead concentrating on new and different puzzle elements. The blocks that are present in later titles were usually involved in simpler interactions, were unable to be flipped and were integrated into the environment much more seamlessly as "moveable objects" - nevertheless blocks and their interactions continued to be a part of the series in subsequent titles and were an element that even persisted into Crystal Dynamics subsequent projects.[SR1][SR2][BO2][DEF] 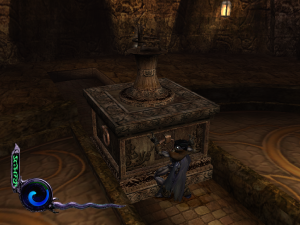