"Divine? Your imprisonment has damaged your mind, Janos. The curse of vampirism is no mark of divinity." - Kain 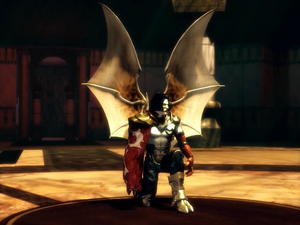 Raziel as a vampire

The Blood Curse, also called The Dark Gift or Vampirism is a curse that was first introduced into Nosgoth as the blood curse cast on the Ancient vampires by the Hylden. The curse had many effects including blood-thirst, sterility, immortality and aversion to sunlight and water; those afflicted with the curse became known as Vampires. Due to the effects of the curse, some later vampires would view it as a divine blessing rather than a curse.

The Ancients were said to worship a God whose primary function was to recycle souls, and it was every Ancients' honour to be spun in this the Wheel of Fate. However, the opposing faction of the Hylden rejected their God, and the Ancients ignited a war between the two species. The Hylden ultimately lost this war, but did not end their campaign quietly. They cursed the Ancients with a predatory blood-thirst, and worse still, immortality. This inability to die naturally drove many of the Ancients to despair as the act itself cut them off from their God, unable to reuse their souls. Many ancients committed suicide in order to restore the cycle, but the curse also granted sterility. The race would die out of extinction with no way to continue on, and the numbers were declining rapidly with the mass suicides.

The Pillars of Nosgoth now began to chose human guardians due to the ancients inability to produce children (as Pillar guardians are chosen at birth). They adopted as well as abducted the human successors and when they came of age they were transformed into vampires, and deemed it a necessary evil. when the Pillars of Nosgoth were erected to bind the Hylden to the demon dimension as only Vampire Guardians could adequately serve the pillars and their governing forces.

Humans inevitably rejected the curse, fighting off their Vampire oppressors (led by Moebius and Mortanius) and claiming the Pillars as their own. Unable to properly tend to them, the Pillars' power slowly dwindled and the Binding weakened, allowing the Hylden to slowly infiltrate back into Nosgoth. As history became forgotten, the human's eventually simply lost sight of the point of their work, unaware of the evil the Pillars were holding back.

Vampirism causes the subject to become "immortal". They can still be killed, but they will not age like a mortal or die of natural causes. They need not eat, sleep or drink, though their natural human needs are replaced almost solely by a blood-lust/thirst which they were required to do in order to maintain their strength (if anything they were carnivores or plasmavores; where blood only for food; though blood was required for a vampire to be able to do anything, it was also used to heal wounds). Vampires are also sterile, though there are ways that one can create a vampire from another creature. They also have other abilities including superhuman strength, speed, agility, heightened senses, durability, resilieance, healing-factor.

Vampires become more powerful as they age. When evolving from fledglings to adults they will enter a period of hibernation and undergo a state of physical/physiological metamorphosis, receiving new abilities, new physical features, and usually becoming tougher; able to withstand more punishment before succumbing to death, or needing to consume blood.

As above, vampires are sterile, though a few methods were discovered to create vampires from other (not necessarily) living beings, although many of these methods have not been entirely explored or explicitly elaborated upon in the series. It is known that one can use necromantic magic which is the only way for a Human to create a vampire, as was the case when the Necromancer Mortanius turned Kain, though Mortanius also used the vampiric heart of Janos Audron to do this. It is also known that Kain found a way to divide up his soul and join it with that of a corpse, then place the fused soul back into the cadaver. Using this method, he created a small cadre of vampires who shared some of his powers. This could be done with any sized fraction of the soul, though the more was used, generally, the more powerful the vampire was when they returned to life. 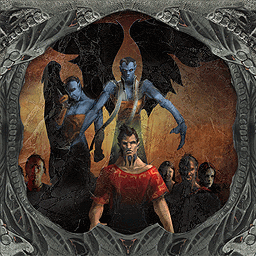 The Ancients would pass their dark gift onto humans in order to prepare them for life serving the Pillars. One of the first turned vampires was Vorador, turned by Janos Audron for crafting the Reaver blade, not for guardianship.

It is safe to assume Vampires turned humans en masse into vampires in order to preserve their species, as opposed to only humans who would serve vampires. This lead to an uprising by the humans who overthrew the Vampires, rejected their gift, and took control of the pillars.