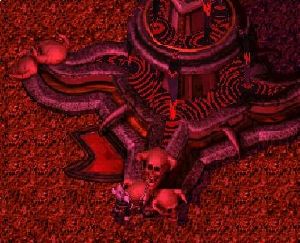 A Blood Fountain turning from Red to Black Blood

Blood Fountains appear in Blood Omen: Legacy of Kain, Kain could use them to refill his health and obtain new abilities. They could be used only once before the blood in them turned black and it caused Kain harm.

Unused dialogue in Blood Omen seems to suggest that at least two blood fountains had been removed from the finished game. One would have granted Kain immunity from the water damage of the Termogent Forest Swamp, the other would have "improve[d] [his] vampiric abilities", though what this entailed is unknown. Other dialogue seems to suggest that some of the blood fountains were originally meant just to fill up Kain's blood or magic meters and could be used more than once.