The Broadsword was first encountered by Kain inChapter 5: The Sarafan Keep, but could not be properly utilised until Chapter 8: The Eternal Prison, Broadswords were often found in the hands of the dangerous Glyph knights. The sword was similar to the Long Sword, with many of the same attacks; Broadswords were longer and wider than the Long Sword and did far greater damage, but were much slower.[1] Like the Long axes, The Broadsword was also useful because it had an (instant kill) grab attack -decapitation- alongside the usual pommeling of the face (the decapitation could not be used on Sarafan Knights or Glyph Knights, who were protected by shoulder pads or non-grabbable enemies such asDemon spiders).[BO2] 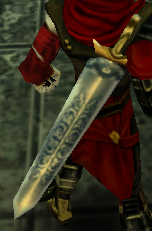 Broadsword sheathed on Kain's back