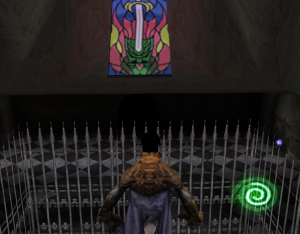 The chapel is an area in Legacy of Kain: Soul Reaver and consists of two rooms entitled "Chapel4" and "Bonus1". Even though they are not directly connected, they both share the same texture assets. The Chapel area is guarded by two fledgling Turelim. 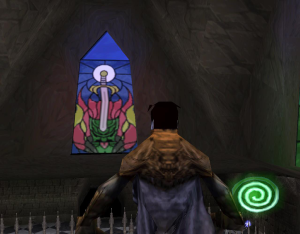 The Chapel area is endowed with Sarafan imagery across the walls and features a stained glass depiction of Vorador´s beheading and what appear to be Sarafan priests on the side windows.

The fact that the Chapel room is entitled "Chapel4" in the code hints that Chapel1 through 3 are missing. It is unknown whether these three rooms are just the previous version of Chapel4 or different rooms altogether.

There are also two blocked off doors in the room and it is currently unknown if they were supposed to lead anywhere.

The area was supposed to include more apparent Sarafan imagery but was not used in the game.