"Strange, how my history came full circle...This chapel, I realized, was a memorial to my former Sarafan brethren and myself... all of us martyred here, and then so cruelly profaned by Kain when he imposed his ‘gift’ on our noble corpses."
―Raziel — Listen (file info)[src]

The Chapter House, or Chapter Houses, were a pair of identically named and similarly appearing significant chambers within the Sarafan Stronghold. First featured as a playable area of the Stronghold in Soul Reaver 2, a second 'successor' Chapter House would subsequently be featured in Legacy of Kain: Defiance. The chamber notably featured a central ouroboros floor mural and was the site of the battle between the Wraith and Sarafan Inquisitor Raziel and Third paradox in Nosgoth's early history; later eras bore murals and a statue depicting the martyred Sarafan warrior inquisitors.

The Chapter House was a significant area within the Sarafan Stronghold, consistently presented as large two tiered octagonal chamber with a high domed roof and floor mural depicting an ouroboros symbol - a snake eating its own tail. The chamber was first featured in Soul Reaver 2 as Raziel explored the Pre-Blood Omen era stronghold in A Reaver in Time and was one of the last rooms encountered by Raziel before he left the stronghold. In this era the room was a memorial to the fallen Sarafan warrior inquisitors and contained idealized murals of Raziel former brethren and a statue of the Sarafan Raziel, which served to motivate Raziel against Kain.[SR2-C1] After leaving the stronghold from a high balcony accessed from the upper chapter house, Raziel would return in A Fateful Meeting, again passing through the Chapter house on the way to the Circle's gathering-room attempting to use the Time-streaming chambers to travel to Nosgoth's early history; but instead he was sent by Moebius to the Post-Blood Omen era. 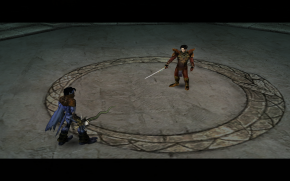 Like many of the areas of the stronghold, the Chapter House was noticeably run-down and weathered in the Post-Blood Omen era and was the scene of a battle between Demons and Demon hunters.[SR2-C5] When Raziel returned to Nosgoth's early history and re-entered the stronghold, he would be channeled into retrieving the Reaver and facing his former brethren in combat. After defeating his former brethren in the other significant rooms, the much plainer Chapter House was the final chamber Raziel reached and the site of the climactic conclusion to Soul Reaver 2; as Raziel battled his fomer human self, learned his destiny to be imprisoned in the Soul Reaver and was temporarily spared this fate by Kain's ignition of the Third paradox.[SR2-C10]

Another identically named and similarly designed "Chapter House" was featured as a playable location in Legacy of Kain: Defiance as Kain returned to the fortress in Nosgoth's early history seeking answers from Moebius, some years after the conclusion of Soul Reaver 2.[DEF][1] Kain would first enter the (plain) chapter house in Infiltrate the Stronghold, noting the unusual Falcon-shaped lock and defeating a Sarafan ambush before he was able to enter Moebius's chambers and find the Falcon Insignia.[DEF-C1] Retrieving the insignia and returning to the chapter house in Pursue Moebius, Kain used the Falcon insignia to open his way to the upper tier of the chamber, allowing him to progress to the Relic Room above Sanctuary to gain Malek's Shield. [DEF-C3]

The Chapter House was among the most consistent of the recurring rooms within the stronghold maintaining its two tiered octagonal structure, distinctive ouroboros floor marking and general appearance between eras and titles, though there were several features that changed. 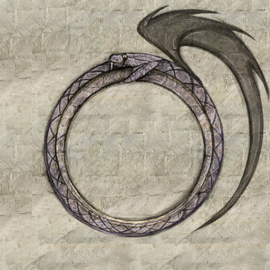 When the room first appeared in the Pre-Blood Omen era of Soul Reaver 2 the chamber was described and depicted as a "memorial" to the fallen Sarafan warrior inquisitors. The room was presented as an octagonal chamber with entrances on the northern and western walls (leading to Chapter House Entrance/Sanctuary and the Cloister-Chapter House antechamber respectively). Five of the walls were decorated with murals depicting Raziel's former brethren in turn, whilst the sixth and final wall contained a statue of the Sarafan Raziel (clockwise from north: Sanctuary door, Zephon, Raziel, Turel, Rahab, antechamber door, Dumah). A small open door between the Melchiah and Rahab murals in the south-south-west led up a spiral staircase to the upper tier inside the 'dome' of the chamber and a circular balcony overlooking main chamber. The upper tier was surrounded by stained glass windows on all sides, but one entrance on the east above the Raziel statue led out to the balcony corridors. Banners of Moebius's mercenary army were seen hanging from the upper tier.[SR2][SR2-C1]

Much of the same layout and features were seen when Raziel visited the room in the Post-Blood Omen era, though like much of the stronghold the room appeared heavily eroded and decaying, with the banners ripped down, many of the murals beginning to wear away and the statue of Raziel missing leaving only the alcove where it formerly stood.[SR2][SR2-C5] The Chapter House was shown as a much plainer room in Nosgoth's early history when Raziel visited that era in the final stages of Soul Reaver 2, containing only hints towards the memorials of later eras in the empty (Raziel statue) alcove and the mural walls - each of which were blank depicting only a modest Sarafan symbol. Sarafan banners were seen flying from the upper tier, though the upper door could only be used in the Pre-Blood Omen era.[SR2][SR2-C10]

The Chapter House in Legacy of Kain: Defiance was largely consistent with the chamber seen in Soul Reaver 2 though several changes were seen. Again the Chapter House was presented as a two-tired octagonal chamber with a high domed roof dominated by its central ouroboros symbol, which had been given greater texture and resembled Monumental brass engravings. The center of the chamber now contained three strips of golden carpet pointing towards the two doors which had remained in the same positions (although the door formerly leading to the antechamber now led directly into the Small Battlements area instead) and a third door, the Falcon Insignia lock, positioned where Turel's mural had appeared. The places for Raziel and Rahab had been replaced by false doors which spawned enemies, while the places that would later contain the murals for Melchiah, Zephon and Dumah featured similar walls to those seen in Soul Reaver 2 with apparent 'preliminary' designs depicting two figures and a pattern beneath a redesigned Sarafan symbol.

With no spiral stairs seen, the Falcon-lock door led up a much straighter staircase to the upper tier inside the 'dome' of the chamber and the circular balcony overlooking main chamber, emerging above the Zephon alcove.[DEF][DEF-C1][DEF-C3]

The upper tier was again surrounded by stained glass windows on all sides, but for a door above the Dumah alcove (a different place to Soul Reaver 2) which led to the upper level of the "Chapter House Entrance " chamber. Minor changes included the removal of the banners in the room and a more luxurious gold trim and decorations (including around the preliminary murals),[DEF][DEF-C1][DEF-C3] presumably reflecting the supposed opulence and wealth-hoarding tendencies of the later Sarafan history.[2] The chamber itself also appears to have subtly shifted position within the Stronghold, as with the Chapter House Entrance corridor turning different directions between titles, the Chapter House itself seems to have shifted a small distance westwards for Defiance, though it appeared to maintain the same orientation in relation to other areas. [DEF] As with other recurring rooms, It is unclear if the larger differences were in-universe extensions made to the area in the years between Soul Reaver 2 and Defiance or simply alternate design interpretations of the main areas of the Sarafan Stronghold.

In Legacy of Kain: Defiance: 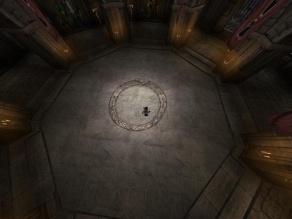 The Chapter House floor and Ouroboros symbol in Soul Reaver 2