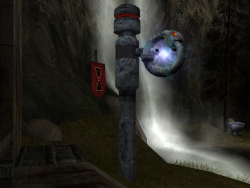 Checkpoints were a gameplay mechanic featured in Soul Reaver 2, Blood Omen 2 and Defiance, where they allowed Raziel or Kain's progress up to that point to be temporarily 'saved'. If the protagonist was then killed, their progress would be resumed from the last activated checkpoint. Loading a game would also start it from the last activated checkpoint or save altar.[SR2][BO2][DEF][1][2][3][4][5]

"As I passed this arcane landmark, a wisp of the Reaver's energy was drawn into the ring, illuminating it. This created a beacon of sorts in the spirit world – if ever I found myself depleted in the spectral realm, and my soul tossed on the ethereal winds, these beacons would draw me back to safety and restore me."
―Raziel — Listen (file info)[src]

The Checkpoint mechanism was first used in Soul Reaver 2 where the checkpoint markers appeared as a ringed ouroboros symbol (a snake eating its own tail) mounted on walls or specific poles. The first marker observed was encountered by Raziel on the banks of the 'inner' Great Southern Lake as he exited the Sarafan Stronghold in the Pre-Blood Omen era in A Reaver in Time. Their function was explained as the marker taking a wisp of the Reaver's energy to illuminate and create an orb of energy within the ring to create a beacon within the Spectral plane. If Raziel was ever depleted of health in this plane, the last activated beacon would guide his soul to it and restore him to full health while within the spectral realm. Only one beacon could be kept active at a time, whatever happened to the energy when it dissipated is unknown.[SR2][SR2-C1][1][2]

A different form of checkpoints were seen in Blood Omen 2, where Kain first encountered a Checkpoint in his training in Chapter 1:the Slums - in contrast to Soul Reaver 2 they were given no verbal description and only in-game text tells players to "walk over the checkpoint to mark your progress"[BO2-C1][3]). Thereafter checkpoints were seen regularly throughout the rest of the game. The checkpoints appeared as a set of red 'sparkles' which formed into a large red circular 'ancient symbol'[6][7] resembling a blood splatter when Kain stepped over them[BO2].

Checkpoints returned in Defiance where their appearance again changed to represent the two protagonists symbols - a red colored Kain symbol inside a circle for Kain, and a blue colored Raziel symbol inside a circle for Raziel - these checkpoints lacked 'sparkles' and simply appeared as Raziel or Kain stepped over them. Again these were first encountered in the initial Chapters as Kain infiltrated the Sarafan Stronghold in Infiltrate the Stronghold and as Raziel escaped the underworld in Escape from the Elder God Chamber.[4][5][DEF] 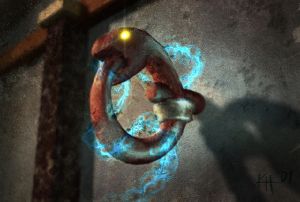 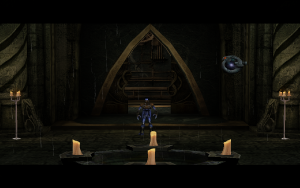 The new checkpoint in the Post-Blood Omen era