"Yes, the scourge of the Circle. The most depraved and decadent example of his whole degenerate race.
He slaughtered six of my fellow Guardians as they cowered, defenseless, in this room."
―Moebius — Listen (file info)[src]

The Circle's gathering-room was a significant chamber in the Sarafan Stronghold, seen in cutscenes in Blood Omen: Legacy of Kain and featured as a playable location in Soul Reaver 2. The chamber was notably the site of Vorador's Slaughter of the Circle in Nosgoth's early history and later eras bore murals depicting this event.

The Circle's gathering room was a significant recurring location within the Sarafan Stronghold, presumably used as a meeting chamber for the Circle of Nine. The room was first featured in cutscenes Blood Omen: Legacy of Kain where flashbacks to Nosgoth's early history in Chapter 1 and Chapter 6 depicted several Pillar Guardians meeting in the room at the height of the Sarafan Vampire purge and observing the massacres through the central viewing basin. Whilst the guardians gathered, they were attacked by the Vampire Vorador, who slaughtered six of their number and defeated their protector - Conflict Guardian and Sarafan leader Malek.[BO1-C1][BO1-C6] 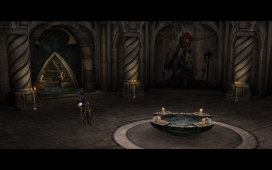 Raziel is led to the Gathering room by Moebius

The gathering room returned as a playable location in Soul Reaver 2 as Raziel arrived in the Pre-Blood Omen era in one of the Time-streaming chambers adjoining the room. After meeting with Moebius, Raziel began Chapter 1 in the gathering room, which was now decorated with Murals depicting the Slaughter of the Circle and the martyred guardians.[SR2-C1] Raziel would return to stronghold in Chapter 5, attempting to use the Time-streaming chambers to travel to Nosgoth's early history, but Instead he was sent by Moebius to the Post-Blood Omen era. Emerging in the gathering room, the run-down and ruined appearance of the chamber allowed Raziel his first clues as to the era he now inhabited.[SR2][SR2-C5] The chamber could not be accessed when Raziel returned to Nosgoth's early history and was not present in-game.[SR2]

Visually, the gathering room was consistently presented as an octagonal chamber dominated by the circular viewing basin at the center of the chamber. Initially in its Blood Omen appearance, the main door was the only entrance in the room and all the walls of the chamber were plain brickwork, with a few spiral textured pillars.[BO1-C1][BO1-C6] 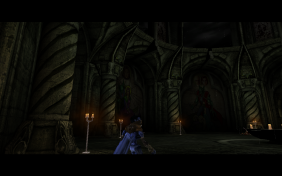 Much of the general design of the chamber (and the nearby corridor) was retained in the Pre-Blood Omen era of Soul Reaver 2, though several small additions were seen in the - two formerly blank walls perpendicular to the main entrance now contained doors to Time-streaming chambers and the five remaining blank walls had been decorated with murals depicting the six fallen guardians (depicting in order the martyred Balance, States, Nature, Mind/Dimension and Energy Guardians). The number of spiral pillars around the chamber had increased and the high domed roof of the chamber was also seen for the first time.[SR2-C1]

When Raziel was transported to the Post-Blood Omen era he found the gathering room largely ruined, with the roof collapsing and several corpses littered around the chamber. The murals and design of the chamber had remained unchanged from the Pre-Blood Omen era, though the area was much darker and many textures were worn or eroded. Other subtle differences included the removal of the Light Crystal above the second Time-streaming chamber and the addition of a Checkpoint.[SR2-C5]

In Blood Omen: Legacy of Kain: