"Throughout the Stronghold I discovered evidence of my former nobility, and my life as a Sarafan priest.
This was the heritage so foully stolen from me when Kain raided my sacred crypt and defiled me."
―Raziel — Listen (file info)[src]

The Cloister, or Cloisters, were a pair of identically named and similarly appearing significant chambers within the Sarafan Stronghold. First featured as a playable area of the Stronghold in Soul Reaver 2, a second 'successor' Cloister would subsequently be featured in Legacy of Kain: Defiance. The Cloister was notably the site of Raziel's confrontation with Sarafan warrior inquisitors Melchiah and Zephon in Nosgoth's early history. A Statue of Malek would occupy the courtyard in Defiance.

The Cloister was a significant area within the Sarafan Stronghold, consistently shown as wide open-air courtyard surrounded by covered walkways. 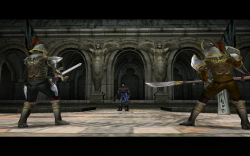 Melchiah and Zephon confront Raziel in the Cloister courtyard

The chamber was first featured in Soul Reaver 2 as Raziel explored the Pre-Blood Omen era stronghold in A Reaver in Time. Entering the courtyard, Raziel would comment on the Sarafan iconography of the area before he was confronted by Vampire hunters.[SR2-C1] After leaving the stronghold, Raziel would return in A Fateful Meeting, again passing through the Cloister on the way to the Circle's gathering-room attempting to use the Time-streaming chambers to travel to Nosgoth's early history, but instead he was sent by Moebius to the Post-Blood Omen era. Like many of the areas of the stronghold, the Cloister was noticeably run-down and weathered in the Post-Blood Omen era and was the scene of a battle between Demons and Demon hunters.[SR2-C5] When Raziel returned to Nosgoth's early history and re-entered the stronghold, he would be channeled into retrieving the Reaver and facing his former brethren in combat. When he reached the Cloister, Raziel faced the Sarafan warrior inquisitors Melchiah and Zephon in combat.[SR2-C9] 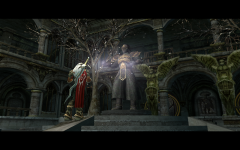 The Statue of Malek in the Cloister

Another identically named and similarly designed "Cloister" was again featured as a playable location in Legacy of Kain: Defiance as Kain returned to the fortress in Nosgoth's early history seeking answers from Moebius, some years after the conclusion of Soul Reaver 2.[DEF][1] Kain would first enter the courtyard in Infiltrate the Stronghold, passing through it and defeating Sarafan troops twice before he was able to enter Moebius's chambers.[DEF-C1] The Cloister would feature in a greater capacity in Pursue Moebius as Kain noted the new statue of Malek at the center of the courtyard and endeavored to restore it by returning the missing shield and sword. Restoring each artifact opened the corresponding doors within the Cloister, ultimately allowing Kain to progress to the gatehouse and bridge area on his way to the tower to confront Moebius.[DEF-C3]

Although maintaining the same features, The Cloister area of the stronghold appears to vary most between its portrayals, with the size, orientation, features and even position within the stronghold varying between appearances. 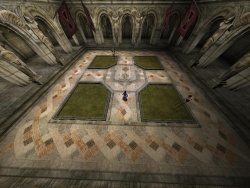 The Cloister Courtyard in Soul Reaver 2

When the room first appeared in Soul Reaver 2 it was depicted as a large open air square-shaped paved courtyard area, containing four small grass enclosures with an eastward facing Sarafan symbol on the paving at the center. The courtyard was surrounded by a single story of arcade walkways, with two winged Sarafan icons on the center of each side and many banners around the area. Beyond the low walkways, the roofs of the Chapter House and Sanctuary areas could be seen. The area remained largely consistent within the eras visited in Soul Reaver 2, with banners and conditions subtly changing according era.[SR2][SR2-C1][SR2-C5][SR2-C9]

The Cloister in Legacy of Kain: Defiance featured a number of drastic changes from that seen in Soul Reaver 2. The chamber itself was similar to previous appearances, again presented as a large open air courtyard surrounded by covered arcade walkways, but many features had changed. The courtyard itself appeared to be extended, creating a larger, rectangular space and increasing the size of the central paving area, which now contained more elaborate paving, six grass enclosures (with trees growing in four of them), several entrance trapdoors for Sarafan troops a statue of Malek in the center at one end of the courtyard replacing the former Sarafan symbol. The covered arcade walkways around the courtyard remained but they were less open, with direct walking entrances to the central courtyard at only two points at either end of the chamber, with each flanked by two of the remaining winged Sarafan icons (Defiance showed only four in contrast to Soul Reaver 2's eight, with two on each wall). The walkways themselves had also been expanded and a second level tier added above the first, which now obscured the view over the roofs of Sanctuary and the Chapter House. Minor changes included a different design on the banners in the room and a more luxurious green and gold trim, presumably reflecting the supposed opulence and wealth-hoarding tendencies of the later Sarafan history.[DEF][DEF-C1][DEF-C3][2]

Perhaps most significant of the changes was the positioning of the chamber itself; with the Cloister appearing alongside the main Sanctuary area in Soul Reaver 2[SR2], whereas in Defiance the room was joined to the "Sanctuary Entrance" chamber and main Sanctuary door, suggesting that it had apparently moved to an adjacent side of the Sanctuary chamber. Connections to other chambers also appeared to rotate, perhaps suggesting the orientation of the Cloister itself had been changed between titles.[DEF] It is unclear if the major changes seen were in-universe extensions made to the area in the years between Soul Reaver 2 and Defiance or simply alternate design interpretations of the main areas of the Sarafan Stronghold.

In Legacy of Kain: Defiance: