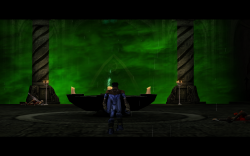 "You shall not pass!"
―Black Demon — Listen (file info)[src]

Combat Barriers were special impenetrable forcefields featured in Soul Reaver 2 and Legacy of Kain: Defiance that were summoned by certain enemies to prevent Kain or Raziel escaping during combat.

Combat barriers were seen in Soul Reaver 2 and Defiance whereby certain enemies could summon impenetrable barriers to force the protagonist to face and battle them.[SR2][DEF]

Combat barriers were first seen in Soul Reaver 2 as Raziel traveled to the Post-Blood Omen era in A Fateful Meeting. When he first emerged from Moebius's Time-streaming chambers in the Circle's gathering-room of the Sarafan Stronghold, Raziel was confronted by his first Demons - a pair of Acid demons - who summoned a green barrier to prevent his escape. Thereafter groups of demons regularly summoned such barriers to force Raziel into combat. These were especially used when Raziel returned to the Stronghold in Nosgoth's early history in Blade of Vengeance where they were used repeatedly, giving the impression of an increasingly difficult set of enemy encounters. In order to dispel each barrier it was necessary for Raziel to defeat all the demons in that area.[SR2][SR2-C5][SR2-C9] 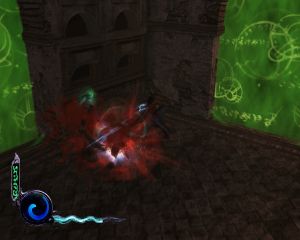 Combat barriers returned in Legacy of Kain: Defiance in a slightly different form. They were first seen at the end of Infiltrate the Stronghold where Kain's infiltration of the Sarafan Stronghold in Nosgoth's early history led him to Moebius's chamber in the catacombs beneath the building. After a brief confrontation with Moebius, Kain was faced with a group of Lesser Shades who summoned barriers to cover the entrance to the chamber and prevent access to the Falcon Insignia and exit of the room. Thereafter, barriers were summoned by a range of enemies to force Kain and Raziel in combat - most notably they were used by Hylden Revenant types, Shades, Demons and spellcaster humans like the Sarafan inquisitors, Vampire hunter sorceresses and Cenobite summoners. As before, the barriers would be dispelled if all enemies in the given area were defeated, though on occasion it was possible to defeat the spellcaster that summoned the barrier in order to proceed.[DEF][DEF-C1]

Throughout the games in which they appear a number of different variations on the design of the combat barriers were seen, presumably relating to the source and size of the area covered by the barrier.[SR2][DEF] 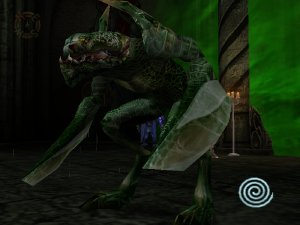 An Acid demon with appropriate barrier

In Defiance a more varied set of creatures was able to summon them and the barriers themselves could be divided into two sets of broadly similar designs. The first design - used primarily to cover doorways and other smaller areas - was marked with an unusual circular pattern and varied color according to race; with Archons and Shades using purple barriers, Hylden Revenants using green barriers and Demons or spellcasting Humans (such as Sarafan inquisitors, Vampire hunter sorceresses and Cenobite summoners) using red barriers. The second variant design - used primarily to cover large areas - consisted of a simple pulsing effect to the barrier; with Vampire hunter sorceresses using wavy green barriers and the Ancient vampire members of the Circle of Nine using straighter blue barriers.[DEF] A unique third variant was present in the Kain/Raziel boss battles in Avernus Cathedral - of unknown origin, this barrier consisted of a circular pattern of golden speckles.[DEF][DEF-C11][DEF-C12] 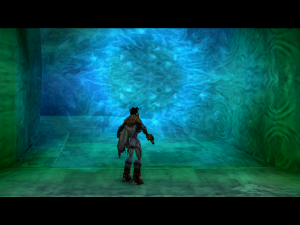 The Soul Reaver barriers summoned by the Elder God