"Coorhagen, my home, the finest city in all of Nosgoth, rich in vanity and conceit. I had no delusions as to the welcome I would receive."
―Kain — Listen (file info)[src]

Coorhagen is the city of Kain's (human) birth, it was situated north of Vasserbünde and was visited by Kain in Blood Omen: Legacy of Kain. 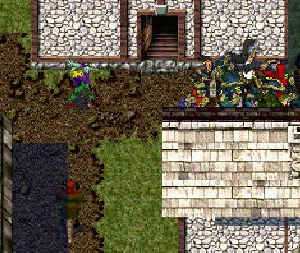 Kain was to return to Coorhagen during Blood Omen on the way to Malek's Bastion, by the time he returned to Coorhagen he found the city had been overrun by the plague, which had ravished the city, leaving carts full of bodies littering the streets and blocking many of the cities paths, consequently Kain had to travel through Coorhagen in a maze of underground chambers and dungeons. In Coorhagen, Kain was able to find the Bone Armor, as well as the Repel and Inspire Hate spells. He also found his first Pentalich of Tarot and Anti-Toxin artifacts.

Kain comments on the plague that seized Coorhagen as he entered, noting that it had ravaged a few remote villages far east. It is not known which villages these were and no other Nosgothic settlement seen so far exhibits any sign of the plague. Some fans have speculated that there is a link between The Plague seen in Coorhagen and the creatures seen in Dark Eden; as the ruined settlements on the path to Dark Eden are possible candidates for former 'Plague Villages'.

It is likely that Kain's presence in Ziegsturhl at the start of Blood Omen was because he was fleeing the plague that had seized Coorhagen. The Plague also made Kain's visit to his next target, Malek's Bastion, that bit more difficult, as Kain could not feed on tainted blood in Coorhagen, or the magical Blood in the Bastion.

As Kain himself notes, Coorhagen was loyal to Willendorf and many tapestries had Ottmar's Lion sigil on them.

Coorhagen has some interesting floor murals; as well as many which appear to represent death and there is a prominent 'grim reaper' mural. Along with this, there is a mural of the Iron Sword, which given the nature of 'power-up' related murals in Blood Omen may suggest that the Iron Sword was meant to be collected by Kain in Coorhagen; this may also imply that in early versions, Kain was meant to start the game here.