Corruption of the Pillars 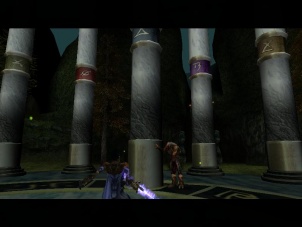 Raziel and Kain witness the Pillars Corruption (SR2)
This is the sublime moment of our undoing, Raziel – the ineffable fulcrum upon which swings the entirety of our history.

The Corruption of the Pillars was a major event in Nosgoth's history and Legacy of Kain mythology; arguably Kain's (and Raziel's) entire story is spent trying to restore them.

The Corruption was the result of events 30 years before the main story events of Blood Omen: Legacy of Kain. Ariel, the Guardian of Balance, was murdered by Mortanius who was possessed by the Dark Entity. Nupraptor, Ariel’s lover, discovered her body and was wracked with grief; convinced of Mortanius’s guilt and fueled with suspicions of treachery within the rest of the Circle; Nupraptor descended into madness and unleashed his immense psychic powers upon his fellow Guardians.

Meanwhile, in the Town of Coorhagen the son of a nobleman, Kain, was born to be Ariel’s successor: the new Guardian of Balance. At the moment of Kain’s first cry, Nupraptor used his telepathic connection with the Pillars and their Guardians to send a psychic wave of corrupting madness throughout the Circle. The Pillar Guardians, including the infant Kain, were tainted by the curse; infected with Nupraptor’s madness like a disease. The Pillars of Nosgoth, bound as they were to their Guardians, were also tainted by the corruption and began to crack and corrode, rotting to the core and infecting the very land of Nosgoth itself.

For the next thirty years, the Circle degenerated further and further into dementia, destroying the very essence of Nosgoth and leading to the murder of Kain. Resurrected as a vampire, Kain was manipulated into freeing Nosgoth from Nupraptor’s taint by becoming the Scourge of the Circle and killing the inflicted Guardians. As each Guardian was slain Kain retrieved from their corpse a Token of Power that he symbolically offered to the Pillars curing the corruption and restoring the land. The spell was almost lifted at the conclusion of Blood Omen when only Kain and the Pillar of Balance were still inflicted by Nupraptor’s curse. Disgusted by the way he had been used and manipulated; Kain refused to sacrifice himself to end the Corruption and the Pillars crumbled sealing Nosgoth's fate.

Kain's soul remained infected by the corruption even as he built his great Empire; apparently unaware of just how deeply the taint ran. Four hundred years after Nupraptor first cast his spell Kain broke into the Tomb of the Sarafan and resurrected his six Lieutenants: Raziel, Turel, Dumah, Zephon, Rahab and Melchiah. Breathing part of his soul into them to resurrect them, Kain passed the corruption onto his children who in turn passed it on to their own. By the time Kain’s Empire reached its peak, some 2500 years after Nupraptor’s death, every single vampire in Nosgoth was corrupted. The Corruption affected the vampires somewhat differently than it had the human sorcerers. Over a vast period of time the vampires’ bodies began to devolve; they would enter a state of change and emerge from it altered and with new abilities. At first this devolution seemed to be beneficial providing the vampires with gifts such as talons making them tougher and, as they believed, more divine. Raziel was the first to experience this metamorphosis before his master when he emerged with a pair of wings. Seemingly for this, he was executed.

Over the next millennium the vampire race degenerated rapidly into deformed monstrosities; hideous, malformed and feral. Only Kain himself seemed capable of holding back the devolution, even as his Empire crumbled around him. (it's possible that he traveled forward in time to the point when Raziel returned to the Material Realm).

However, with Raziel's sacrifice during the conclusion of Legacy of Kain: Defiance, the Corruption was finally lifted from the Elder Kain when Raziel used the Spirit Reaver to purify Kain himself; removing the corruption that had plagued his entire existence.

Victims of the Corruption[edit | edit source]

Nupraptor’s attack was originally intended to affect only the seven Guardians he suspected of treachery but quickly spread to affect far more than anyone could have guessed.