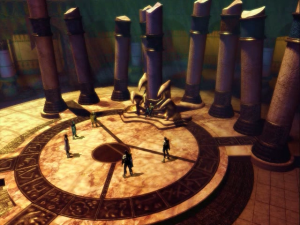 Kain's Vampire Lieutenants were Sarafan Warrior Inquisitors raised from the dead by Kain to serve as his second-in-command.

During the era of Kain's Empire, Kain raised six Sarafan Inquisitors from the dead to help oversee the land he controlled. The six were Melchiah, Zephon, Rahab, Dumah, Turel, and Raziel. Kain would evolve and the lieuntenants would follow. But one day, one lieutenant, Raziel, evolved past Kain, growing wings. Kain tore the bones from Raziel's wings and cast him to burn forever in the Abyss. The Elder God "saved" Raziel and sent him after Kain as his personal assassin, reaping the souls of vampires to put them back into the "Wheel of Fate".