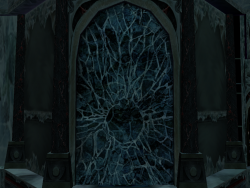 "This elemental Reaver, I discovered, had the power to obliterate barriers that were cracked or compromised.
At last, I had the means to open that ruined time-streaming chamber I discovered so long ago in the swamp.
Now perhaps I could leave this wasteland, and return to an era when Janos Audron still lived."
―Raziel — Listen (file info)[src]

Cracked doors, also known as Cracked barriers or Compromised barriers were a set of destructible objects found throughout Soul Reaver 2. Once Raziel gained the Air Reaver he could fire Reaver projectiles that were powerful enough to shatter them, allowing him passage beyond.

Cracked doors appeared solely in Soul Reaver 2 where they were associated with the Air Reaver. Raziel first encountered a cracked door when he ventured to the Swamp in the Pre-Blood Omen era in Through the Swamp, where he recognized a mysterious door leading to one of Moebius's Time-streaming chambers, but was unable to breach it. Raziel returned to the same area in the Post-Blood Omen era in A Fateful Meeting but was once again unable to enter the building.[SR2][SR2-C3][SR2-C5]

As Raziel progressed further north beyond Uschtenheim and Janos Audron's Retreat he found his way into the Air Forge, where he was able to gain the Air Reaver enhancement for the Wraith Blade. As he left the forge one of the passages was blocked by a cracked door and blasting it with a projectile from the Air Reaver, Raziel discovered that the blade now possessed the power to blow these barriers apart and allow him to progress beyond them.[SR2][SR2-C6]

From this point onward Raziel was able to breach the doors fairly regularly. In On to the Past he was able to blow apart the door protecting the time-streaming chamber in the swamp and was thus able to use it to return to Nosgoth's early history. Later on in Vampire Interview, Raziel would use the door breaching method several times to complete the puzzles to reach the summit of Janos Audron's Retreat.[SR2][SR2-C7][SR2-C8] 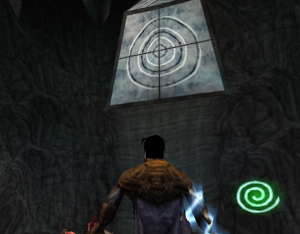 A telekinetic breakable from Soul Reaver