Crouching, sometimes referred to as Crawling was a basic ability used by Raziel in Legacy of Kain: Soul Reaver and Soul Reaver 2.

Crouching was an innate ability featured in Legacy of Kain: Soul Reaver and Soul Reaver 2, used by pressing a 'crouch' button it allowed Raziel to bend down on one knee and lower his center of gravity. Crouching had a number of varying applications.

In Legacy of Kain: Soul Reaver, Raziel would drop to one knee when the crouch button was pressed and would crawl forwards if the direction buttons were pressed in conjunction. Whilst crawling Raziel would not fall off cliff edges, making it useful for lining up jumps. Whilst crouching, Raziel could jump to execute a higher crouch-jump, which was useful for reaching high ledges or exiting water-filled areas whilst Swimming. Crouching could also be used to flip Blocks, turning them over and Raziel could also put down any standard weapons he was carrying whilst crouching.[SR1][1][2][3]

Crouching returned in Soul Reaver 2 with crawling, crouch-jumping and putting-down weapons returning as its primary uses, but it could no longer be used to flip blocks. The most significant change for Soul Reaver 2 was the introduction of crouching into the combat repertoire, allowing Raziel to duck high enemy attacks and perform a number of low attacks.[SR2][4][5] 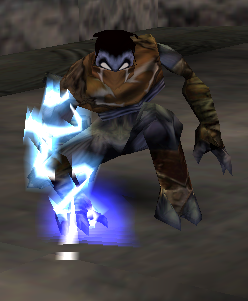 In all of his appearances, Raziel has an idle animation which features him crouching and tracing out his clan symbol in the dirt, before wiping it out[SR1][SR2](symbolizing the apparent fate of his clan). This animation continues in Legacy of Kain: Defiance, despite Defiance not featuring a distinct crouching ability.[DEF]