The Dagger was first found on the floor of the Slums and could later be found in the hands of Thieves[1] from the Smuggler's Den onwards . It was not particularly powerful, but was quick and enabled Kain to perform more 'agile' combos. The Dagger's Stealth kills included slitting the victims throat and a driving the Dagger through their skull so it protruded from the mouth. 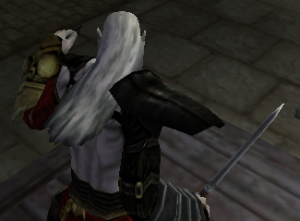 Kain armed with the Dagger

Grab attacks were of a stabbing variety (to the side and heart).[3]