Discussing abilities planned for Raziel to earn in a May 2000 interview concerning Soul Reaver 2, Amy Hennig commented on the development of the Wraith Blade enhancements "right now there's seven elemental Reaver enhancements that you can find, that you have to find. This is stuff that we wanted to have in the first game, but there was just too much, we couldn't do it all. So things like Earth Reaver, Air Reaver, Water Reaver, Fire Reaver, that kind of thing. There's seven of those, and then seven enhancements of those enhancements." as well as confirming the presence of "nine additional spell-type things" She caveated this information, saying it "could change", "based on our schedule and what we're going to have to adjust as we go".[1] Later previews in the August 2000 issue of Electronic Gaming Monthly added: "You'll find seven reaver augmentations that bestow special charge-up moves. Find the Fire Reaver augmentation and you can cast a ring of fire by holding the attack button. The Dark Reaver augmentation gives you temporary invisibility, the Light Reaver power-up will illuminate an entire room and blind light-sensitive enemies, etc."[2][3]

The final version of Soul Reaver 2 incorporated no side-quests - neither the "spell-type things", nor the Reaver augmentations intended for Raziel to obtain - and only four of the seven planned Reaver enhancements made an appearance (though the Dark Reaver was among them).[SR2] A remnant of the Dark Reaver augmentation remains in the retail version as the invisibility effect can be activated with cheat codes, leaving the Raziel character as transparent; though its effects do not appear to be properly implemented and enemies can see Raziel. None of the other augmentations was present and it is unknown how much the effects were realized before being cut, as well as how and where they were intended to be gained[3] (though the Dark augmentation presumably required the Dark Reaver to be gained first).

Legacy of Kain: Defiance would feature the return of the charging and augmentation effects as part of the regular powers of the permanent Dark Reaver, without having to be gained separately.[DEF][3] As such, Raziel could use the mechanic of Feeding the Reaver to charge and enable the Reaver to perform Charged attacks and Reaver spells, with the Dark Reaver spawning mini-shades with its Charged attacks and featuring the invisibility effect as its Reaver Spell.[DEF][4] 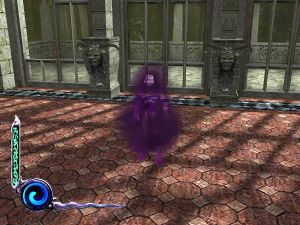