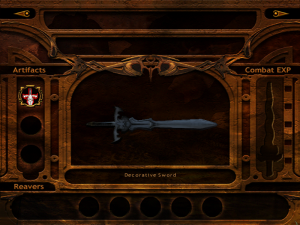 The Decorative Sword in the Inventory

The Decorative Sword was an artifact used by Kain in Defiance. It could be found in Chapter 3: Pursue Moebius.

The Decorative Sword was the last of the artifacts that Kain would acquire in the Sarafan Stronghold in Chapter 3: Pursue Moebius. After using Malek's Sword to ascend to the upper gatehouses of the stronghold, Kain discovered an unusual Sealed Door with an emblem depicting crossed swords in the first gatehouse, though one of the blades was missing.

Soon after Kain was able to cross a bridge to the second gatehouse and found the Decorative Sword next to the entrance to the lower tower. Returning the Decorative sword to the sealed door in the first gatehouse, Kain completed the emblem and unlocked his way to a sealed chamber in the gatehouse containing the Flame fragment of the Balance Emblem. Using the power of Flame, Kain was able to ignite two fire sconces to begin his ascent to the upper tower to confront Moebius.