The Demon Hunters were a Demon-hunting faction featured in Soul Reaver 2, encountered by Raziel in the post-Blood Omen era.The Demon Hunters were descendants of Moebius's Mercenary Army; with all vampires (except Kain) exterminated, Moebius's army shifted their focus to the demons and Mutants that began to infest Nosgoth after the Collapse of the Pillars. 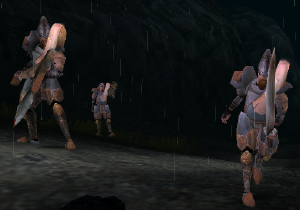 In the aftermath of the collapse of the Pillars, the boundaries between dimensions were weakened and Demons began to penetrate into the Spectral and Material Realms.[1][2] With the vampires virtually wiped out, the now-leaderless soldiers of Moebius's mercenary army saw the demons as a greater threat to human populations and actively began hunting them.[3][4]

In the decades following the collapse of the pillars the army changed greatly to adapt to combat the demon threat.[3] Presumably to defend against the ferocious attacks of the demons, the demon hunters wore heavy all-covering armor and were proficient at blocking attacks[3][SR2]. Compared to their predecessors, the demon hunters shared similar attacking styles, with close-range swordsmen,[5] long-range cannoneers[6] and mid-range axemen [7] (compared with pikemen), albeit with more aggressive and 'developed' tactics, which emphasised powerful attacks over speed (including the use of a powerful two-handed axe weapon).[3][4] Similarly, Demon hunters like their forebears used attack dogs,[8] but these appeared to be a slower, more powerful breed[SR2]. 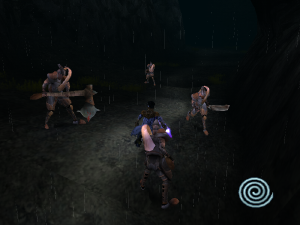 When Raziel arrived in the post-Blood Omen era a century after the pillars collapse, he was able to witness the Demon hunters and their enemies. By this time the Demon threat had become a dangerous infestation and few areas seemed safe, with even the previous headquarters of the people's army at the Sarafan Stronghold overrun. In this "ghastly future",[9] several previously 'inhabited' areas were abandoned and ruined, former flags and banners had been torn to shreds and the hunters themselves wielded somewhat primitive-looking weapons and were often overwhelmed in combat by the Demons[SR2].

The ultimate fate of the demon hunters is unclear and they appear in no further titles. Presumably they continue to fight the demon threat for as long as it remains, but how long this continues is unknown.

Though Demon hunters were prevalent in the early Post-Blood Omen era, the leadership and structure of the order is entirely unknown. Basic Human troops all wore the same identical all-covering armor and variants were distinguishable only by the weaponry. Four variants were observed; the human swordsmen, cannoneers and axemen, along with their trained attack dogs.