The Developer's level select was a cut location included in Blood Omen: Legacy of Kain. Originally intended to aid the development process, the area comprised of a set of corridors with labelled doorways leading into different sub-areas and ultimately onto discreet sections of the game world, providing quick access to some of the most significant areas within the game. Direct access to the developer's level select area was removed from the retail version of Blood Omen but remains in game files and can be accessed with the aid of trainers or cheat device codes.

Arguably the first discovered cut content in the Legacy of Kain series, the developer's level select area was uncovered shortly after the release of Blood Omen: Legacy of Kain by code creators developing codes for cheat devices.

The Level Select area appears to be the remains of a mechanism used by developers during the production of Blood Omen to provide quick access to a variety of important locations. Access to the area was removed in the retail version, but remains in the game files and can be accessed through codes or trainers.

Activating the level select area caused the game to start as normal, requiring the player to complete the sequences up to Kain's human death. Once this stage had been reached, Kain was placed in the initial corridor of the level select area, free to choose the next location encountered through its doors.[BO1][1] 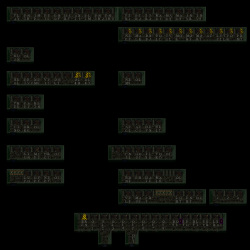 The Developer's Level Select was broken up into two main map areas and a number of smaller chambers containing relevant ability cards. The main areas both comprised of straight corridors with a number of doors labelled with abbreviations, which led off of the main corridor; each doorway led to one of the small chambers where the relevant items and abilities could be collected from a number of 'ability' cards and passing through these led further corridors with abbreviated doorways leading onto sections of the main game world (or in some cases, onto further sub-sections before reaching the game world). Effectively the corridors and doorways made up a physical 'menu' of sorts, comprised of in-game assets, which enabled the user to navigate to specific areas by identifying the relevant door abbreviations. Though consisting of only two areas bigger than a single room, the arrangement and organisation of the areas made it somewhat of a complicated area to navigate.[1][BO1]

The initial corridor section consisted of 16 abbreviated doorways, each leading onto game-areas or onto further sub-sections. The doorway at the bottom marked "OUT" exited the area, whilst the unmarked doorway next to it returned Kain to the game, continuing from Kain's grave inside his mausoleum. whilst the (yellow) doorway at the top marked "BREN" continued the game, returning Kain to the outdoor Cemetery area. The remaining doorways in the initial corridor all led to subdivision corridors covering each of the game 'levels' (labelled as "OL1" to "OL8"), bosses ("BOSS"), Spirit forges ("SPFG"), Blood fountains ("BLFT"), Secrets ("SECR") and the Battle of the Last Stand ("LSTBAT").[1][BO1]