"There are benefits to traveling beneath a human guise. The threat to my person is lessened and much information can be gleaned. However, the illusion is flimsy, and any act of aggression on my part can break the spell."
―Kain — Listen (file info)

The Mask of Disguise, also known as Disguise Form, is an ability acquired by Kain over the course of Blood Omen. When used, Kain's appearance transformed into that of a human 'peasant' character. This had the advantage that Human enemies would no longer attack Kain, and many 'ordinary' enemies effectively became NPC's, that could supply Kain with further information through conversation. 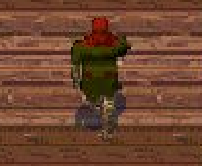 When Kain passed through Steinchencröe, The Lunatic advised him that others would speak to him, if he knew "how to look". Shortly afterward, Kain found the Mask of Disguise in a tent in a gypsy camp, South of Vasserbünde. Kain was unable to attack whilst in Disguise Form and any attempt would simply 'cancel' the spell. The Mask of Disguise was eventually superseded by the superior Beguile Form when Kain approached Willendorf and it's Provincial Mines .

Vorador hints that Kain may have retained the Disguise or Beguile abilities (or both) in Blood Omen 2, saying he can "disguise [his] presence" - Kain himself even comments that "these Humans never look twice in my direction".