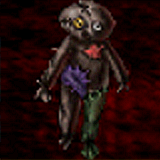 Strange that such a tiny thing, a shred of burlap and silk with a single lock of hair nailed to it, could bring a Kingdom to its knees. Small things frequently have enormous consequences.

Elzevir's Doll was a simple doll crafted by Elzevir the Dollmaker as part of a spell to control or otherwise possess the Princess of Willendorf. It was retrieved by Kain during the events of Blood Omen: Legacy of Kain. The doll contained a single lock of the Princess' hair gifted to Elzevir by King Ottmar as a reward for crafting the finest doll in the Kingdom. Elzevir was a minor sorceror of little power who specialised in trapping souls within effigies. With the Princess' hair he was able to trap her soul within the doll leaving the Princess in a lifeless coma. Elzevir was killed by the fledgeling vampire Kain who had been tasked by Ottmar to save his daughter. Kain took the doll back to Willendorf where it was used to restore the Princess.

Elzevir's motives and plans for the doll remain a mystery, which is probably for the best.