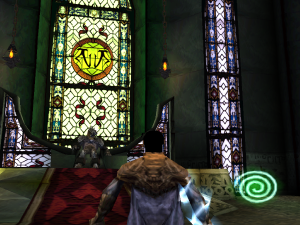 Dumah´s throne room is located within the bowels of the Ruined City in the north.

The throne room is the largest room in scale with highest roof in the whole game. It houses two giant Dumah statues and an ornate stained glass window bearing Dumah´s clan symbol. The room is decorated with several writings on the wall, clan symbols and a long red carpet. When Raziel stumbles in the room, he finds Dumah dead, stuck in his own throne. 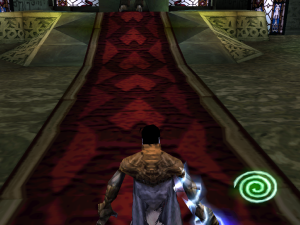 Even though the rest of the Ruined City bears burning marks on its walls, the throne room appears to be untouched and was probably locked by the vampire hunters to make sure Dumah could not be resurrected and escape.

The red carpet was re-used again in Soul Reaver 2, in Janos Audron's Retreat.