The Earth Reaver was a permanent elemental enhancement for the Wraith Blade created by the Ancient vampires and wielded by Raziel in Legacy of Kain: Defiance.

With none of the Reaver fonts previously used to imbue the temporary enhancements making an appearance in Defiance, Raziel was forced to find more permanent alterations to the Wraith Blade[DEF], with the Earth Reaver the sixth of these enhancements that Raziel found[DEF-C10].

When Raziel arrived in Avernus Cathedral in Defiance, he found a sealed chamber housing a Warp gate that transported him to the Earth Forge within the Vampire Citadel. Defeating the spirits of the original Ancient vampire Energy and Time Guardians he was able to power the Soul conduit at the heart of the forge and use it to absorb their souls into the Wraith Blade, imbuing the Wraith blade with elemental Earth to create the permanent Earth Reaver, which could be selected at will.[DEF][DEF-C10] 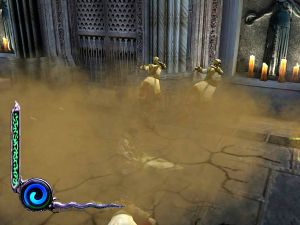 The Earth Reaver manifested as a light green blade. It could be used to activate Earth plinths, summoning temporary Earth platforms which Raziel could use to reach higher areas. With the Earth Reaver equipped Raziel was also able to walk on the bottom of water-filled areas and interact with submerged objects. In combat the Earth Reaver could reflect damage onto nearby enemies with its Charged attacks whilst its Reaver spells caused a powerful earthquake which inflicted major damage on enemies.[DEF][1]