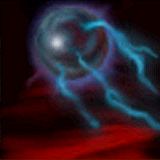 "When conjured, the Energy Bank permits me access to mass amounts of magical energy for a brief period of time. However, when the moment passes, I will be drained of all magic, unable to cast even the simplest of spells."
―Kain — Listen (file info)[src]

The Energy Bank was an artifact wielded by Kain as a fledgeling vampire during the events of Blood Omen: Legacy of Kain. When activated the Energy Bank gave unlimited magic to Kain for a short period, allowing him to repetedly cast his most powerful spells. The most useful aspect of the Energy Bank by far was that it allowed Kain to wield the Soul Reaver at full power for as long as the Energy Bank was active. Once the Energy Bank had run its course it would completely drain Kain's magical energy leaving him vulnerable.

The Energy Bank could be acquired from a Spirit Forge hidden behind a crack in the cliff face at the south-western the edge of the Termogent Forest.

As his own power grew Kain abandoned many of his old weapons and artifacts; after the events of Blood Omen Kain became powerful enough to wield the Soul Reaver without relying on the Energy Bank's store of power. The Energy Bank is never seen or mentioned again following Blood Omen.