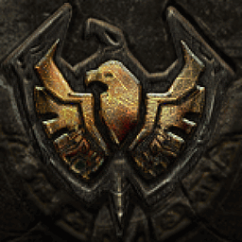 "This artifact seemed as though it was made for that unusual lock. Now the door could be opened."
―Kain[src]

The Falcon Insignia was an artifact used by Kain in Defiance. It was the first quest-related item encountered by Kain and could be found in Chapter 3: Pursue Moebius.

When Kain returned to the Sarafan Stronghold in Chapter 1 of Defiance, he noted a door with an unusually shaped locking mechanism in the 'chapter house' area of the stronghold and he resolved to find the key. By the conclusion of the chapter, Kain had confronted Moebius beneath the stronghold and discovered the unusually shaped Falcon Insignia embedded in a door in Moebius' chamber.

In Chapter 3, Kain's initial objectives revolved around the recovery and return of the Falcon Insignia and he collected it from Moebius' chamber and returned the artifact to the chapter house, unlocking the Sealed Door and allowing Kain to ascend to the upper levels of the 'chapter house' and 'sanctuary' areas of the stronghold; ultimately opening the way to the 'relic room' where Kain collected Malek's Shield.

The Falcon Insignia bears a striking resemblance to the symbols seen on the banners of the Legions of the Nemesis seen in Blood Omen: Legacy of Kain, several centuries later and may have been deliberately designed as such. As with the contents of Moebius's museum, Moebius is presumably responsible for this placement and even indirectly comments on the fate of the legions in his chambers before Kain collects the insignia.