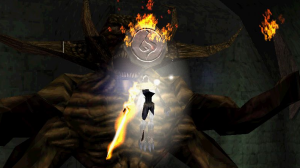 The Fire Glyph is a Glyph spell acquired by Raziel in Legacy of Kain: Soul Reaver.

It is one of the last glyphs that Raziel can acquire in the game. It can be found deep within the Razielim Territory, but only after killing Rahab and acquiring the ability to Swim. Once inside the temple, Raziel had to solve a puzzle by lighting a pan held by a demon-like statue with a torch. When used, Raziel forms 2 small fire orbs in each hand, then he raises his hands high up and a giant fiery wave is sent around him, incinerating any enemies close by. This glyph is probably the most powerful glyph of all due to its ability to kill any non-boss enemy. It requires 8 points of Eldritch Energy to use, making its cost the second greatest of all. It should be noted that although its range is smaller than that of the Sunlight Glyph, its effectiveness is greater, due to the fact that the Sunlight Glyph only kills Vampires, while the Fire Glyph kills both vampires and Humans.