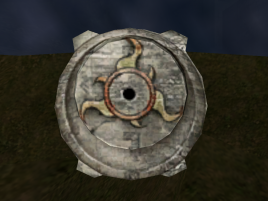 The Fire Plinth in game

"The frozen surface of the lake had bound the gates of the stronghold shut.
The Sarafan surely had some other means of entry, but this was the only one known to me.
To infiltrate the fortress, I would need to find some way to release these gates from their icy bonds."
―Raziel — Listen (file info)[src]

The Fire plinth was an elemental platform encountered in Soul Reaver 2 that allowed the user to melt the ice on the Great Southern Lake and access the dock entrance of the Sarafan Stronghold. Operation of the Fire plinth depended upon the Fire Reaver. 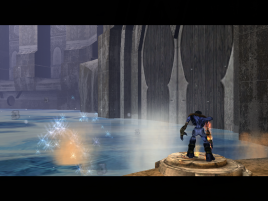 The Fire plinth was a unique elemental platform seen in Soul Reaver 2 as an application of the Fire Reaver. Only one fire plinth was encountered in the game and this was first seen relatively early on in A Reaver in Time, with Raziel exiting the Sarafan Stronghold via the Great Southern Lake and passing by the plinth by the stronghold's dock entrance on the 'outer' lake. At this stage the plinth was unusable and Raziel made no comment on it.[SR2][SR2-C1]

The plinth would still be in place but was similarly unusable when Raziel returned to the lake in The Light Forge (chapter) and A Fateful Meeting.[SR2][SR2-C4][SR2-C5] When Raziel travelled to the Post-Blood Omen era he found the Fire plinth still intact and in position but likewise unusable.[SR2][SR2-C5][SR2-C7] When Raziel continued his journey on to Nosgoth's early history, he could discover the plinth again at the now iced-over lake which blocked the dock entrance to the stronghold, offering his first clue as to its function, however once again it was initially unusable.[SR2][SR2-C7]

After obtaining the Fire Reaver from the Fire forge within Janos Audron's Retreat, Raziel could return to the lake where the now-active plinth was positioned. Activating the plinth with the Fire Reaver caused a patch of ice to melt in front of the dock entrance allowing him to open the doors and re-enter the stronghold for the final time.[SR2][SR2-C9] 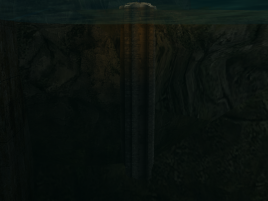 The fire plinth under the water line

The design of the fire plinth consisted of circular stone platform at the edge of the lake with a subtle grey border and four small rectangular 'feet' around the outside of the platform which seemed to anchor the structure into the ground. In the middle of the plinth another slightly raised circular platform of a slightly lighter tone was positioned slightly off-center and touching the border at the top, giving the impression of a brown-grey crescent moon shape when approached from the bottom. The Fire symbol decorated the center of the raised platform, with a small hole in the center of the middle circle which Raziel used to activate the plinth. At the edge of the lake the plinth could be seen to descend well underneath the waterline, forming a long cylindrical pillar that stretched nearly to the bottom of the lake, with the 'feet' seen above ground extending into rectangular struts.[SR2][SR2-C1][SR2-C5][SR2-C7][SR2-C9]

When the plinth was first seen in Soul Reaver 2 it was encountered in its inactive state,[SR2][SR2-C1] but when Raziel gained the Fire Reaver and activated the Fire-attuned Reaver fonts, the plinth was also activated and began issuing a subtle orange flame-like effect. Once in this state Raziel could activate the plinth simply by driving the Fire Reaver down through the opening on the central circle, which caused the ice on the lake to immediately melt in a pattern around the dock doorway.[SR2][SR2-C9]