The Fire Reaver was a permanent elemental enhancement for the Wraith Blade created by the Ancient Vampires and wielded by Raziel in Legacy of Kain: Defiance.

With none of the Reaver fonts previously used to imbue the temporary enhancements making an appearance in Defiance, Raziel was forced to find more permanent alterations to the Wraith Blade[DEF], with the Fire Reaver the third of these enhancements that Raziel found[DEF-C6].

As Raziel made his way towards the Pillars of Nosgoth he discovered a sealed chamber nearby and a Warp gate that transported him to the Fire Forge within the Vampire Citadel. Defeating the spirits of the original Ancient vampire Conflict and Nature Guardians he was able to power the Soul conduits at the heart of the forge and use it to absorb their souls into the Wraith Blade, imbuing the Wraith blade with elemental Fire to create the permanent Fire Reaver, which could be selected at will.[DEF][DEF-C6] 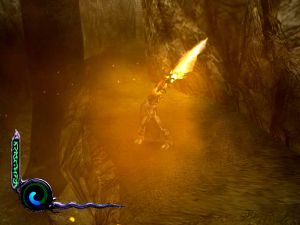 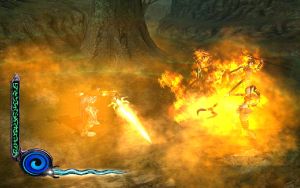 The Fire Reaver manifested as an orange cored blade with waving orange energy. The Fire Reaver had several pyrokinetic abilities including a Charged Attack and a Reaver Spell that set enemies on fire causing major damage, though this power was offset by the inability to consume the Souls of burnt enemies in the Material Realm. The Fire Reaver could also be used to ignite Fire sconces.[DEF][1].