The Flame fragment of the Balance Emblem

The Flame Fragment was a fragment of the Balance Emblem found by Kain in the Sarafan Stronghold . It was a powerful relic that imbued the Reaver blade with the elemental property of flame, adding flame and heat to the physical damage done by the blade, as well as giving Kain pyrokinetic abilities. 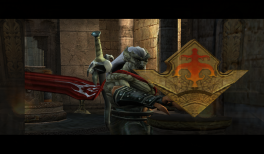 The Flame Fragment was closely connected to the Pillar of Conflict (after which it was named in the debug menus) . When fully charged with blood it could create an aura of immense hate, causing enemies to attack each other in a fury and abandon all defense. This mimicked the Inspire Hate spell.