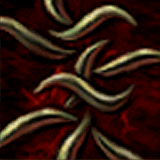 "Should this object strike an enemy, rot and decay would instantly eat their flesh, and leave only a pool of blood and tissue. For a time after, the toxins are still active, and therefore lethal to the touch."
―Kain — Listen (file info)[src]

The Font of Putrescence, also known simply as Putresce, was an artifact wielded by Kain as a fledgeling vampire during the events of Blood Omen: Legacy of Kain. When used the Font of Putrescence fired a bolt of energy that would seek out a nearby enemy and upon impact dissolve their body into a pool of poisonous flesh. The toxic remains left by the Font of Putrescence were highly contagious; if Kain or another enemy touched the puddle of contaminated flesh they would be instantly poisoned.

The Font of Putrescence could be acquired from the Spirit Forge on the outskirts of Coorhagen; a city consumed by disease and plague.

Following the events of Blood Omen, Kain seems to have abandoned many of his weapons and artifacts and the Font of Putrescence is never seen or mentioned again.