The Force Glyph is a Glyph Spell acquired by Raziel in Soul Reaver .

The Glyph can be found in the Melchahim Territory, but only after killing Melchiah and obtaining the ability to Phase Through Gates. After Raziel killed Melchiah, he could get through the gate that blocked his path to the temple of the glyph. Once he got there, he had to solve the puzzle to get the glyph. The puzzle was quite simple. There were three columns surrounding a circle in the centre. After Raziel pushed all of them over, they formed a pattern equal to that of the glyph. After that, the glyph can be acquired. The glyph can be used to perform a telekinetic shockwave that can throw enemies away and slightly damage them, or even kill them if they hit a spike or fall into a fire. It requires just 1 point of Eldritch Energy, thus it has the smallest cost out of all glyphs(except the Plane Shift glyph which has no cost at all).  The only known user of this glyph is of course Raziel. 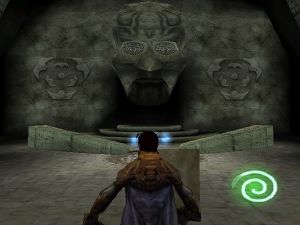 If the camera is moved to look around the room you will see a large bust of someone's head (possibly Nupraptor's, as would explain the veins lapping over the dome on the top of the bust).

The Force Glyph is the only Glyph spell inSoul Reaver that was not originally planned to have an accompanying Wraith-blade enhancement.