Glyphs also known as Elemental Glyphs or Glyph Spells were a set of environmentally sensitive spells that could be optionally gained and used by Raziel in Legacy of Kain: Soul Reaver. A different set of Glyph spells were planned to feature in Soul Reaver 2, based on the Pillars of Nosgoth, but these were ultimately cut.

Glyph spells were first featured in Legacy of Kain: Soul Reaver. Raziel began the game with a single glyph, the Shift Glyph, which allowed him to Shift into the Material Realm while standing upon a planar portal.[SR1][SR1-C1] Throughout his travels in Nosgoth, Raziel could uncover six elementally attuned altars - each altar contained a puzzle which would gift Raziel with a new Glyph spell when completed and once he gained his first glyph, Raziel was able to acquire the Eldritch energy with which to power them. [SR1][1][2][3] 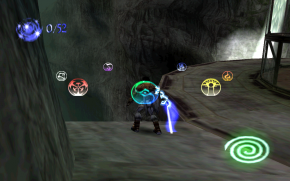 When a new glyph was gained a symbol for the glyph would appear in one of the vacant spots of the Ring menu and could be selected at will, though only the Shift glyph could be used in Water or the Spectral Realm. When activated, the glyphs had varying ranges and effects which could be used to damage, stun, knock enemies into environmental obstacles or destroy them completely. The glyphs each cost diffing amounts of Eldritch energy to cast, relative to their power and discrimination between enemies.[SR1][1][2][3]

The Glyphs in Soul Reaver were originally intended to have been much more integrated with the story and each of the glyphs (except the Shift and Force Glyphs) would have had an accompanying Reaver enhancement most of which were ultimately cut. A single glyph spell, the Spirit Glyph is known to have been removed from Soul Reaver, along with its companion Spirit Reaver.[4]

The following table illustrates the known effects and costs of the various glyph spells, both present in and removed from Legacy of Kain: Soul Reaver:

Discussing abilities planned for Raziel to earn in a May 2000 interview concerning Soul Reaver 2, Amy Hennig followed details on the planned Reaver augmentations with a mention that the game would include "nine additional spell-type things. It's not really spells; it's all kinds of things. Instead of having a spell menu, he just has the ring menu, and he there's things he can do from that, he can summon the Reaver from that, he can shift, he can influence the environment in other ways. Some of these things are more physical abilities, some of them are more mystical, but there are nine more of those. So there's actually more things to earn in this game than there were in the last. Less physical abilities, I mean it's not like now I can fly, or now I can burrow underground, it's more like new ways to interact with the environment that you couldn't do before". She caveated this information, saying it "could change", "based on our schedule and what we're going to have to adjust as we go".[5] 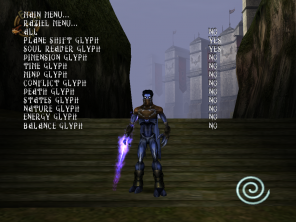 The SR2 Pillar Glyphs in the Debug Menus

The final version of Soul Reaver 2 incorporated no side-quests - neither the "spell-type things", nor the Reaver augmentations intended for Raziel to obtain.[SR2] The game's debug menu revealed that the spells were apparently glyphs related to the Pillars of Nosgoth.[6] Though the full ring menu with positions for the nine missing glyphs can be enabled by debugging, the glyphs are only represented by uniform white dots (or by placeholder symbols from Legacy of Kain: Soul Reaver in the Air Forge demo), and they have no functionality.[7][8]

Though probably more closely related to puzzle-solving than its Legacy of Kain: Soul Reaver counterparts, it is unclear what specific abilities many of the 'Pillar Glyphs' would have bestowed upon Raziel.

The following table illustrates the Glyphs planned for inclusion in Soul Reaver 2 - all were ultimately cut.

This article is about The Glyph spells used by Raziel in Legacy of Kain: Soul Reaver and planned for Soul Reaver 2. For the energy seen in Blood Omen 2, see Glyph magic.