Glyphwrights, also known as Glyph Wraiths[1][2], were an NPC class encountered by Kain in Blood Omen 2; apparently allied to the Sarafan, the highly secretive Glyphwrights were seen in the early chapters of Blood Omen 2 maintaining and working on the Glyph magic network.[3] Later chapters revealed that the Glyphwright form was merely a convenient disguise used by the Hylden scientists when moving amongst Meridian's human populace.[4]

In the post-Blood Omen era of the Fourth timeline, the Hylden were able to escape the Demon dimension and return to the Material Plane;[5][6] establishing the Sarafan to combat the vampire threat and conquer Nosgoth.[4][7][8] Uncovering and intending to use the ancient weapon The Device, the now free Hylden decided to introduce a glyph energy network to all of Nosgoth, more specifically Meridian, to channel the energy of the Mass.[9] Because the Hylden's rule in Nosgoth was secretive and hidden behind the human Sarafan, Hylden scientists couldn't be allowed to roam the streets in their Hylden form. To this end they were able to completely alter their physical appearance (possibly by the use of a machine in the Device), allowing them to be passed off as ordinary human beings - The Glyphwrights.[1][4]

Glyphwrights were first encountered by Kain shortly after his revival, when being trained by Umah in Welcome to Meridian[BO2], Umah commented that they were a "secret society" that worked on the Glyphs and said that little was known of their origins.[3] Throughout the early chapters of Blood Omen 2, Kain was able to observe the Glyphwrights on several occasions working onGlyphs, though they were always beyond his reach - some could be observed vanishing as Kain approached however[BO2]. The Glyphwrights apparently did not talk with the ordinary citizens of Nosgoth, who were afraid of them; though they were seen talking with Faustus in Chapter 2:The Smuggler's Den.[2] 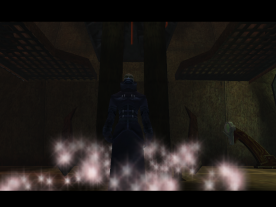 Later on, in Chapter 9:Into the Depths, when Kain infiltrated the Device, the Beast's revealed the true nature of the Glyphwrights[4] and Kain was able to witness a Glyphwright reverting to Hylden scientist form, an enemy which Kain battled throughout the Device and the Hylden City (see also Hylden scientists).[1] The defeat of the Sarafan Lord at the hands of Kain and the destruction of the Hylden Gate killed the post-banishment Hylden in Nosgoth's Material Realm .[BO2]