The Golden Ouroboros was a quest item used by Raziel to open the Spirit Forge in Legacy of Kain: Defiance. It was also seen briefly in Soul Reaver 2 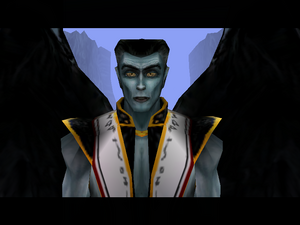 The Golden Ouroboros in Soul Reaver 2

The Golden Ouroboros first appeared indistinctly in Soul Reaver 2 as gold colored decorative necklace worn by Ancient vampire Janos Audron.[SR2] It could be observed in both scenes involving Janos, though it was not named or usable as an item.[SR2-C8][SR2-C9] With Janos's death, the necklace would remain with his corpse, which was later recovered by Vorador.[DEF-C8]

In Legacy of Kain: Defiance the Golden Ouroboros featured in a greater role and was again linked with Janos Audron.[DEF] It could be observed briefly around the neck of Janbos's corpse in Find Vorador,[DEF-C8] but came into its own as a quest item with the revival of Janos in Battle Kain.[DEF-C12]

The Golden Ouroboros door in the 'Spirit Forge Entrance' chamber

In the council chamber of the Vampire Citadel, sensing the opening of the outer chamber of the "innermost sanctum" of the citadel, Janos removed the Golden Ouroboros and gave the item to Raziel - revealing it as larger symbol depicting a snake eating its own tail. Raziel would only carry it for a short time, quickly taking the item to the "outer chamber" and using it to open the door to the Spirit Forge, where he was able to imbue the Spirit Reaver enhancement.[DEF][DEF-C12][1]