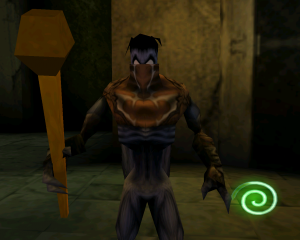 The Gong Stick was the only weapon which was used as a quest item rather than a weapon in Legacy of Kain: Soul Reaver.

The Gong Stick is found beneath the Sound Glyph shrine symbol in an alcove. In order to obtain the Sound Glyph, Raziel must ring the bell with the gong stick. Together with the green staff, there is only one found in the whole game.

However, if carried over through the fence limiting the Sound Glyph area, it behaves as an unlimited torch, capable of igniting enemies.