Greater Demons, sometimes referred to as Beasts or simply Demons, were a breed of powerful demon encountered by Kain in Blood Omen 2, where they were seen in Chapter 10: Wharves and Chapter 11:The Hylden City, as he worked to banish the Hylden back to the Demon Realm .They were arguably the most powerful and dangerous enemies encountered by Kain and were virtually indestructible.

Greater Demons were large, taller than Kain, purple skinned, possessed a number of black horns on their bodies, and were bipedal. Their necks did not come upwards, but forward, making their heads seem to protrude from their upper-chests. They had long arms, and massive claws, which they used to kill in all ways, and which Kain could not block. Unlike their Lesser Demon cousins, Greater Demons were completely uncontrollable and would kill any and everything in sight if allowed to roam free, including the Hylden, who the Lesser Demons served. To contain the beasts, the Hylden would keep them in special prisons (which contained Glyph seals and could be opened via Telekinesis). If freed, they would immediately begin to rampage and would either pursue and kill any nearby characters, or merely flee; likely destroying scenery in the process. The Demons did not appear exceptionally mindless, merely bloodthirsty. They could not jump, and roared often, terrifying any human in their presence[BO2].

Kain first encountered these beings in Chapter 10: The Wharves as one was being transported to the mainland from the Hylden City. On Vorador's advice Kain Charmed a human, and let it escape, killing four heavily armed Sarafan Knights in the process before smashing its way easily through the metal bars and through a nearby brick wall. With the escape of the demon, Kain was abe to sneak into the cage and load himself upon a ship to the Hylden City[BO2].[1] 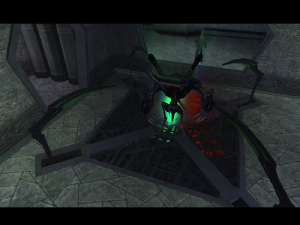 The only observed death of a Greater Demon

Greater Demons would play a larger role in Chapter 11: The Hylden City, where a Greater Demon released by Kain early in the level appeared to follow him causing great destruction through the city. The Greater Demons were completely impervious to Kain's normal methods of attack. Even his powerful Immolate Dark Gift was useless against them. The Demons were not impervious, however, as in the Hylden City, Kain managed to release one via mind-controlling a human from the other side of a thick sheet of glass. Once the Demon had killed the Hylden guard and the human, it stood in front of the sheet of glass closest to Kain, as though appraising how to reach him. Kain activated a Hylden energy streaming device, which the creature was standing on, and the creature's presence caused a massive explosion that shattered the thick glass, and massacred the creature into nothingness.[BO2]