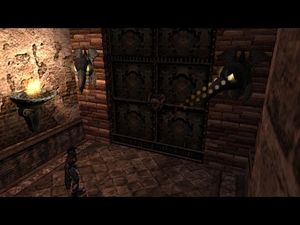 Gargoyles, also known as Watcher Guardians, were seen in Legacy of Kain: Defiance, they were crow-like heads mounted on walls which "quickened" as Raziel approached and closed nearby doors so that he could not pass. To bypass them Raziel needed to imbue the Dark Reaver and use it's Reaver Spell to give him invisibility and he would be able to slip through unnoticed. They were similar to the Sentry Eyes from Soul Reaver 2 in that they prevented Raziel approaching and had to be 'blinded' by the Dark Reaver in some way to allow progression. The origin of these constructs is unknown, but they may be related to Vorador's crows.

Raziel also referred to the Hylden effigies in Vorador's Mansion as 'Gargoyles'.