The HMCS Bitter was a cut location that can be accessed in Blood Omen: Legacy of Kain, resembling a large sailing ship and often interpreted as a pirate-based scene. The Bitter area remained undiscovered in the game until a project to recreate Blood Omen in 3D uncovered it in early 2010.

The HMCS Bitter was presumably a deleted area originally intended to feature as part of Blood Omen: Legacy of Kain - regular access to the area was removed for unknown reasons during the development of Blood Omen and the area remained unknown to the general public until 2010 when the Blood Omnicide team discovered the area in game files as part of their project to recreate Blood Omen in 3D.[1][2][3][4]

Despite regular access being removed, the Bitter can still be entered in game with the aid of walk-through-walls cheats (requiring gameshark codes or the PC trainer to access). The secret doorway leading to the Bitter is hidden out of view behind "Capt'n Bitter's Sudz" in central Vasserbünde. Walking through the back of the building takes Kain to a different area within "Capt'n Bitter's", a short corridor leading to a teleporter pad which sent Kain to the deck of the HMCS Bitter.

This first area consisted of a large Sailing ship with many smoking cannons in a large expanse of Water, surrounded by minor ship debris and identified as the HMCS Bitter on its side. Kain arrived on a teleporter near bow of the ship on the main deck, which was covered liberally in Heart of darkness artifacts and several 'pirate' enemies of varying classes (four Scimitar swordsmen, two Butchers and three Expert knife throwers) . Progressing along the to the quarterdeck, a second teleporter could be found behind the ship's wheel which led to the second map area. 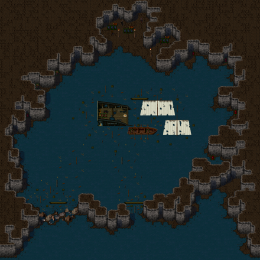 Using this teleporter sent Kain to the deck of a largely destroyed ship, surrounded by major ship debris and trapped within a lagoon-like area. the remaining deck area above the waterline and a nearby rowboat contained a chest, four Font of putrescence artifacts and a single expert knife thrower. Several assorted Fonts of putrescence and Implode artifacts were hidden in the cliffs around the sides of the lagoon, and at the top of the lagoon there was a beach-like area with several lit torches which contained several Heart of darkness artifacts, gold chests and further 'pirate' enemies including two more expert knife throwers, a gravedigger and a miner. Once completed, Kain had to backtrack to return to the rest of Nosgoth. [BO1][1][2][3][4] 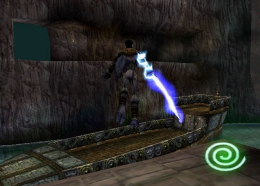 The similarly located boat in Legacy of Kain: Soul Reaver