Hash'ak'gik's altar was a secret area within Avernus Cathedral, visited by Kain during the Blood Omen era. It was a perverse, occult shrine to the god Hash'ak'gik, and contained battle artifacts and a tome recounting his commands to human worshippers. The altar could be visited in Blood Omen: Legacy of Kain.

In the first timeline, while exploring Avernus Cathedral in his search for Azimuth, Kain discovered the Soul Reaver and the Wraith Armor, but these were not the only curiosities he could uncover within its nooks and crannies before confronting the Dimension Guardian. At the north-east end of the Cathedral's main hall, near the public altar, a well-hidden door led to the uppermost balcony of the Hell realm. The balcony led to one adjacent passage - a stone corridor containing many battle artifacts, which, when followed, culminated in a second, much darker shrine.[BO1-C8][1]

The shrine room was gory and chaotic, and it contained a blood-stained tome which read as follows:

"And Hash'ak'gik spoke to the world, and all who heard trembled.
"Bring me your first born, and shed their blood on the altar of the world, so I might take nourishment from them.
Do this without question, or suffer my wrath for eternity."
And its will was done."
―Hash'ak'gik's altar[src] 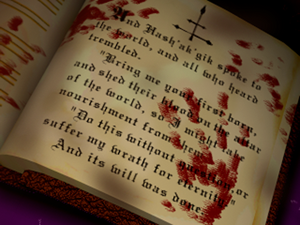 The bloodied tome upon the altar.

The floor of this altar room was decorated with a demon-like image, but Kain had yet to recognize its significance.[BO1-C8] When he confronted Mortanius at the end of his quest, he realized that the Death Guardian had been possessed by a malevolent entity - an entity which, through him, had orchestrated the death of Ariel and the corruption of the Pillars. As he died, Mortanius's body was transformed by the entity, taking on the shape of the monster depicted in the shrine's image. It was the "Unspoken" which Ariel had warned him to be wary of; he defeated it handily.[BO1-C12][BO1-C2]

When Raziel later visited the Avernus Catacombs in the fourth timeline, he discovered the truth behind Hash'ak'gik and his worship.[DEF-C9] Hash'ak'gik was a pseudonym forcibly used by Turel, his vampire brother from the Soul Reaver era: Azimuth, a devout worshipper of the Hylden, had summoned Turel back through time using a time-streaming device stolen from Moebius.[DEF-C9][2][3] The Hylden were an ancient race whose banishment in the Demon Realm was sustained by the Pillars of Nosgoth; they and the Unspoken were one and the same, and they were capable of possessing creatures in the Material Realm to do their bidding.[DEF-C11]

The entity behind Hash'ak'gik and the possession of Mortanius was the Hylden Lord, a leader among the banished militants. Turel, in his devolved state, was trapped, and utilized as the mouthpiece for the Hash'ak'gik cult; periodically possessed by various Hylden, he was used to command the cenobites of Avernus, thus facilitating the downfall of the Pillars, which would eventually give rise to Kain's empire.[2] The words in the tome which Kain had discovered implied that it was all a cyclic phenomenon; Turel had taken part in Raziel's execution under Kain's command, and his order to his disciples that they "shed their [first born's] blood on the altar of the world" to sustain him appeared to emulate the fate which would befall his brother in the distant future.[DEF-C9][SR1-C1][4]

The passageway leading to the altar area was very dimly-lit, and was wrought from stone spattered with blood. The altar area itself was a grim sight, shaped to resemble a jaw (with teeth for walls), and decorated with skull imagery. Innumerable real skeletons filled pits on either side of the trail towards the altar itself, with a few skulls, ribcages spilling over onto the walkway. Nine toppled marble pillars were also strewn around the rubble-laden room, possibly lending suggestion to the ultimate intent behind the Dark Entity's plan.[BO1]

Before Crystal Dynamics obtained the Legacy of Kain intellectual property, Silicon Knights had different plans for what they described as the "Blood Omen series".[5] Although these plans would not come to fruition, their next game, 2002's Eternal Darkness: Sanity's Requiem, focused very heavily upon a grimoire dedicated to a dark god and found in a secret room - the Tome of Eternal Darkness.[6] It seems possible that Hash'ak'gik's altar was originally intended to serve as a "teaser" for a potential sequel to Blood Omen: Legacy of Kain, and that this concept was absorbed into Eternal Darkness: Sanity's Requiem when Silicon Knights lost control of the Legacy of Kain IP.[7]

It is unclear whether the tome on Hash'ak'gik's altar was supposed to relate to the Dark Scripture in Legacy of Kain: Defiance. The maroon, leathery covers of the tome and the Scripture greatly resemble each other, but they were discovered in what seemed to be very different areas of the Cathedral.[BO1-C8][DEF-C9]