"Reputed to have been ripped from the chest of the greatest vampire to have ever existed, Janos Audron, the Heart of Darkness restores vampiric unlife. Life is precious, Janos discovered - as it was torn throbbing and bleeding from his own body."
―Kain[src]

The Heart of Darkness was a legendary artifact believed to possess the power to restore Vampiric unlife. It was reputed to have been ripped from the chest of Ancient vampire Janos Audron by the Sarafan in Nosgoth's early history inspiring many tales and relics into the Blood Omen era.

"His reign of terror ended when the Sarafan finally hunted him down and tore his throbbing heart from his still-living body. This relic came to be known as the ‘Heart of Darkness’, and was supposedly imbued with the power to restore vampiric ‘unlife’. The Sarafan therefore guarded it carefully, lest the Heart fall into the hands of their enemies."
―Raziel[src]

The Heart of Darkness and the legend of Janos Audron were first mentioned in Blood Omen: Legacy of Kain.[BO1] Kain first described the legend shortly after emerging from his grave and finding his first Heart of darkness artifacts, recalling how the heart had been torn from Janos's body at the hands of the Sarafan and was believed to have the ability to restore vampiric unlife.[BO1-C2] Kain often used similar relics to restore his Blood level and revive him if his health was completely depleted (similar to traditional 'extra-lives').[BO1][1][2][3] 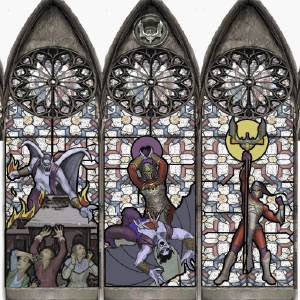 The legend of the heart would be revisited in Soul Reaver 2,[4] initially recounted by Raziel when he encountered a stained glass window depicting Janos's murder and the extraction of the Heart of Darkness in the Sarafan Stronghold.[SR2-C1] With Raziel seeking the truths of his own destiny and told by Vorador that Janos had the answers he sought,[SR2-C3] Raziel traveled into Nosgoth's early history, desperately seeking to reach the Ancient vampire before the Sarafan arrived.

Raziel eventually met Janos at his aerie but his ascent through the retreat had opened the way for the Sarafan warrior inquisitors (the human Raziel, Turel, Dumah, Zephon, and Melchiah) to reach Janos[SR2-C8] and he was powerless to prevent Janos's murder and shocked to discover that his former human self was personally responsible for the act and the extraction of the heart. As the Sarafan retreated taking with them the Heart of Darkness and the Reaver, Raziel vowed to recover the heart - realizing that if the heart was imbued as reputed, he could use it to revive Janos. Raziel pursued the Sarafan to their stronghold and recovered the Reaver, but was unable to find the Heart of Darkness, which remained hidden.[SR2-C9]

Error creating thumbnail: File missing
The Heart of Darkness in the inventory (Defiance)

"And finally, when all these debts had been paid, I would reclaim Janos Audron’s heart from their filthy, unworthy hands. If the heart was truly imbued with the power to restore vampiric unlife, its highest purpose was clear to me... I would restore the heart to Janos, and thus undo the vile crime committed by my abominable former self."
―Raziel[src]

The Heart would return as a quest item in Legacy of Kain: Defiance[DEF][5] and was a vital part of Raziel's chapters in the Blood Omen era - with Vorador taking Raziel to the corpse of Janos and confirming that by restoring the Heart of Darkness, Janos could yet be raised to provide the answers he sought. Vorador affirmed that he had tried many times previously to recover the heart, but it had been hidden too well by their enemies. Believing that Raziel might be the only one who could find it, Vorador directed him to the last known location of the heart in Avernus Cathedral.[DEF-C8]

Exposing the dark secrets of Avernus Catacombs, Raziel was able to interrogate Death Guardian Mortanius, who revealed that he had used the heart to turn Kain into a vampire and hidden it inside him - replacing Kain's own heart and creating the Scion of Balance of the ancient prophecies.[DEF-C10] Shortly after Raziel confronted Kain believing they were enacting the prophesied champions battle.[DEF-C11] With Raziel's rage fueled by the Hylden he angrily tore the heart from Kain's chest and blasted him through a portal to his apparent demise. Taking the heart back to Vorador's Mansion, Raziel was able to use it to revive Janos.[DEF-C12] Ultimately this allowed Raziel to imbue the Spirit Reaver at the cost of the Hylden Lord taking Possession of Janos[DEF-C12] and taking him to begin the Hylden plans.[6][7] 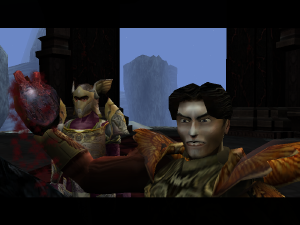 Though not always directly observed, the heart has been present throughout much of the history of Nosgoth. Due to the use of time travel, the heart has a looped chronology, much like the Soul Reaver blade. The known history of the heart is as follows:

"This relic had come at so high a cost -- my blood offering for the answers I sought from this enigmatic corpse. It was the price of my freedom, for which Kain had paid with his life."
―Raziel[src]

This article is about the heart of Janos Audron seen in Soul Reaver 2 and Defiance. For the relics used as a power up in Blood Omen, see Heart of darkness artifacts.