House of my Enemy (chapter) 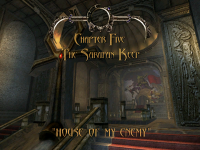 Chapter 5: The Sarafan Keep: House of my Enemy was the fifth chapter of Blood Omen 2 . It followed Kain from him leaving the Chapter 4: The Upper City (having found the secret entrance to the Sarafan Keep from the Bishop of Meridian), until he was able to rescue Umah, imprisoned on the upper levels of the Sarafan Keep. It was succeeded by Chapter 6: The Industrial Quarter, where Kain investigated Umah's information.

Upon arriving from a secret passage to the Sarafan Keep, Kain was contacted by Vorador (via the Whisper) and told that Umah is being held on top of the Keep and that if Kain encounters the Sarafan Lord, he should run away immediately. Kain does not take kindly to the advice concerning the Sarafan Lord and disregards it as cowardice. Kain enters the keep using the Dark Gift Charm to gain access to the servants quarters and advances up the levels of the Keep towards the roof.

Kain is assisted at one point by a lady who works for the Cabal . However, the Lady's assistance is not for charity as Kain is demanded to kill Artemis, a nobleman who sided with the Sarafan (though it is hinted there may be a more personal reason for this). After reluctantly carrying out the assassination, the lady deactivates a Ward Gate, enabling Kain to advance to the upper levels and reach Umah's prison at the top of the Keep and free her. However, the Sarafan Lord stopped them outside the prison. Realising that the Sarafan Lord has possession of the Soul Reaver, Kain attempts to fight the Sarafan Lord. However, before they are struck down, Umah teleports herself and Kain to Sanctuary .

Back at Sanctuary, Kain tells Vorador of his encounter and confesses that he underestimated the Sarafan Lord's strength. Umah then tells the vampires present about a place in the Industrial Quarter that houses a magic portal as well as the Nexus Stone. Kain pledges to fetch the stone as well as fight the Sarafan Lord for the Cabal[BO2].